So I did decide to use the e-bike for work today. Didn't need much equipment, so the rucksack wasn't too heavy. It was 28c outside though, so I took a clean t shirt with me and showered before I set off. The journey to the local school is a mere mile, but although they're on a level with where I'm setting of from, there's a 375ft valley in between. Obviously getting down is no problem, but well hill is a steep climb. Despite this when I got to the top I took a detour to 'life on wheels', a cycling shop just outside Holywell up a further mile slog. The bike (and I) coped with this climb far easier though. I'd guess, on the step inclines I'm probably only achieving 4-5 mph, yet on the slow gradual inclines, it feels more like 10 mph. Anyhow, I made it, and bought myself a new lid. As I'm hoping to spend more time on the road, it seems like the site thing to do. Even if I did read some research earlier this week to suggest motorist give you less space with one on! 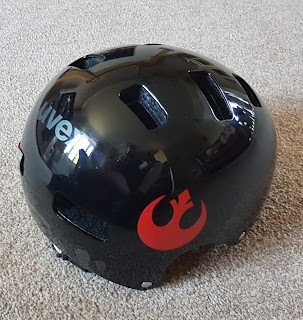 Getting back down to the school wasn't an issue and I've found a route home that is a longer gradual climb, so the bike copes much better, although without the power assistance, it would still be hell on a normal bike.
Getting home, I've got more new toys, a bar, which was very fiddly to fit, that attaches to the handle bars and allows me to spread the gubbins out a bit, and attach my new phone/action cam mount. Also not great but better now I've glued it together better (not to the bike obvs).
Busy day tomorrow, might not get a chance to ride it, hopefully Saturday. 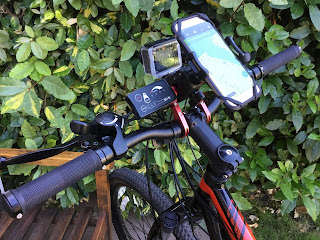