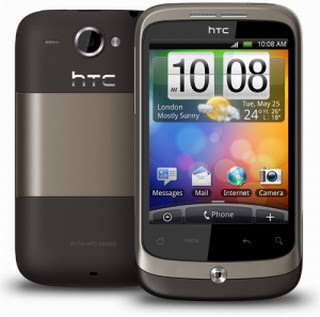 This could be the shortest review ever. Basically, the Wildfire is a poor mans Desire. Perhaps I'm just spoiled by the retina display on my iPhone 4, but this display just looks cheap, which is a shame as the rest of the phone feels really good quality. The fact that it is cheap is good (its free from £20 per month). Weigh it up against it's main rival though (the entry level Sony X10 mini) and it becomes an even stronger proposition. The Desire is one of the best android handsets out there. Partly because of its optical sensor, used to manipulate the cursor. Very useful for correcting errors while texting, or scrolling pages up and down, without obliterating part of the display with your finger, as you have to on many other models. The Wildfire, like the desire, has the same excellent optical joystick (as they like to call it). Which is a major benefit over the X10 mini. Where Android handsets currently are differentiated is with the implementation of Swype. Text input traditionally on Android phones had played second fiddle to Apple's excellent auto correction and been a weak point. Swype (which I believe will eventually make its way to all android handsets) is an exceptionally innovative way to reduce texting errors. If you haven't seen it in action, click here
So far I've only seen Swype on the Galaxy S, it's enabled by going to settings and Text/Locale in the menu and enabling from there. Sadly, it isn't on this latest Android phone and without it. It is, as summarised earlier, it simply a poor mans Desire.
5 Mp camera, LED flash (with flashlight app installed). SD video recording. A good showing for what will be an increasing market, cheaper android handsets for all, however, it isn't half as good as a galaxy S, or even a Samsung Wave. One look at the screens side by side will be enough to convince anyone.
at July 13, 2010 No comments: 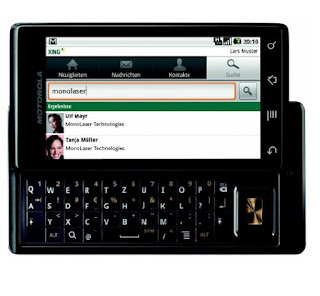 This has a certain mystique about it. We had one of these in store at launch, but it was snapped up on day one and it left before any of us had seen it. Now we've been sent a demo copy, we can have a quick gander. Clearly, upon boot up it is, yet another lovely looking Android handset. Mostly metal in construction is feels heavy and well made, although the back slide on cover, doesn't seem to sit as flush as I'd like, by the camera is a clear unsightly raised line, as if its been involved in a car accident. The slide out keyboard too, requires a bit of effort and although it feels solid and chunky, kinaesthetically, it grinds a little and is not "a pleasure to use". Operation of the device is now becoming a 'run of the mill' android affair. I guess to differentiate these reviews, I'll have to focus on the USP's or differences. Because software wise, its just another great Android phone. Interestingly I saw that preinstalled is Motonav, Motorola's sat nav software. Disappointingly on boot up I found it was merely a trial that needs activating. Even more disappointing was the activation cost of 100 euro's! Fortunately, NDrive is now available for Android handsets and is highly recommended from me at least it comes with a free 7 day trial and I believe the purchase cost is a mere £10. On the outside, the handset looks ok. The keyboard is a full qwerty affair although the buttons are located in square blocks on a flat plasticky/rubberised sheet. Not bad. But nothing to get excited about. The keyboard is also backlight (it looks far nicer with the lights off). The camera is ok and has an LED flash, The video is ok too but not HD.
Overall this is a tough one to call. It is without a shadow of a doubt Motorola's best handset for a long, long time. It also a good looking solid feeling Android handset. It you need a full  qwerty keyboard and can live with the thickness, there is no reason why you shouldn't go for this phone. Its got a good screen and a fair camera to boot. But the Galaxy S has a much better screen and the desire is still a better all rounder. The optical mouse on the Desire is a USP that I think if I was looking, would sway me. Being able to move a cursor around when editing text is a huge benefit that other manufacturers should mimic in future models. Overall though, not a bad effort at all.
at July 08, 2010 No comments: