Ebikes are fun.If you've never experienced one, you really should, once you start pedaling you feel like a 10 year old who's been given a push. If you've ever ridden on an exercise bike, you'll know that the effort required is pretty similar to that of a normal bike, assuming that bike is on a perfectly flat surface and constant. The experience of riding an ebike is pretty similar, only instead of going at a normal pace indoors looking at your wall, you'll be going 40-50% faster, in the fresh air, enjoying nature, sunshine and beautiful scenery. A 10mph cruise on a normal cycle will be closer to 15 mph on an ebike. A slight incline will likely not affect your speed or have much effect on the effort required, steeper and, depending on your fitness level, you'll start to really feel the benefit of an electric motor on your side. But, too steep and because of the laws in the UK, you'll need to be physically fit to continue. Upwards of 8% inclines and you'll be putting in 80% of the effort and sweating, but the (rear wheel) motor should be the difference between stopping and pushing and carrying on. Most entry level bikes sold in the UK are currently rear hub motors, that is to say the rear wheel is powered, which is great for quick acceleration. Models that have motors on the crank (the pedals) are much more effective at climbing steeper hills (because a low rear gear will improve their effectiveness), but they're not so good at quickly accelerating and tend to be far more expensive.
I've been the proud owner of a budget Chinese e-bike for a few years now (pictured below). I've cycled hundreds and hundreds of miles on it; many more than I did in 20 years ownership of the Raleigh push bike I had before it and I'm fitter because of it. 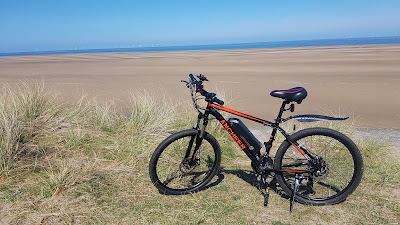 Since I was a child I've always loved cycling, but back then I was blessed with living on the outskirts of the quiet city of Chester. The long cycle up into Chester was a gradual gradient and I was young, fit and had the coolest BMX. But most of the time I stayed on our road, or rode it up to our school.
Now, I'm approaching 50 and I'm less fit, I also live in Greenfield or to be more accurate, Greenfield valley. I can start easily enough as I live on the side of the valley, so the first road is downhill onto a main road that runs the length of the valley from Holywell to the coast. If I cycle up into Holywell, within a mile I have the steep and arduous 'Well Hill' to tackle. Beyond that, I have the climb up to Stamford gate and on towards Pentre Halkyn Mountain, a climb of around 900ft. I can do it, I've done it a number of times during lockdown and I'm fitter because of it. But there are many people who couldn't, even on one of todays ebikes and the reason is because of power.
Uk legislation is currently one of the most strict in the world. Take the US for example. A throttle is ok; up to 20mph. Motors rated up to 750w are ok as well, regardless of whether it's on the rear hub, crank, or front wheel.
By comparison, here in the UK, throttles were allowed up to 15mph, but that regulation was changed, and now the limit is 6..... and not mph, but 6kph. So walking speed, and because the UK government think 750w isn't safe for us, we're limited to 250w. Brexit means that our ebike laws are separate from EU legislation which couldn't be more pro-ebike as they allow 1000w (1KW) and speeds up to 45Kmh (see link).
250w is where the problems on hills arise, it's simply not enough. The cost of ebikes on both sides of the pond vary wildly from just under 1000 (pounds or dollars as, in the eye's of retailers, they're pretty much the same now) to over 7000 or 8000. Yet in the US, if you spend 8000 dollars on a bike (or even far less) you can specify a motor that will make hills, get this, enjoyable. In the UK in a bike shop I visited yesterday, they proudly had a £7200 bike in the window that they were showing off. When I asked about the motor size, and they said it's 250w I just shook my head. While I'm sure the bike was excellent build quality, it was like looking at a 1.4 litre 120bhp Porsche.
For the same sort of effort you'd put in on an exercise bike, getting fit, you could be using technology to help you reach literal new heights and have a load of fun doing it. But with the current legislation in the UK those possibilities are beyond our reach. Our government simply don't think we're responsible enough to own these machines without classing them as 'motorbikes' or mopeds and requiring them to be , improved, insured and er... taxed. But as these are electric vehicles, the tax would be nil, so it's literally just the insurance and approval, that we'd need, which begs the question, should you just get a motor bike, that'd be fun up hills, that would get you out of the house, that would need to be insured, and wouldn't require all the faffing around with the DVLA?
Needless to say, there's no easy way to register a 500 or 750w ebike. You try digging around the DVLA website to do it. I've seen the question asked in forums and the process involves visiting a DVLA test centre to have the bike approved and downloading the forms or applying online. Those eliusive forms are buried deep in the depths of the DVLA archives, in a toilet cubicle behind a door that says "beware of the Lion". Yes, it's a joke.

So the question is why? When the technology exists, when these machines could help millions to get fit, when these machines could help tackle the obesity crisis, why, in the UK especially, is the process for owning this technology so difficult, confusing and prohibitive? Are 500w-750w ebikes the danger that we're all being protected from or are we simply living in a nanny state in the UK under a backwards looking government?