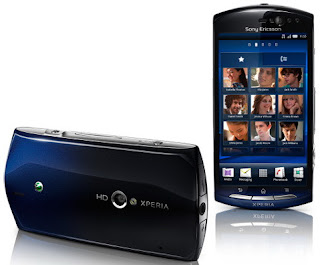 I've just had Sony's latest smartphone offering thrust my way, so it's only right that I should have a quick fiddle. Opening the now traditional Sony Folding box, I find wrapped in a 'greeheart' paper bag, a new phone. Looks like they're conveying some environmental message, although I'm not quite sure what? The unit itself seems smaller than the Experia Arc, the design is minimalist, but slightly cheap feeling, (at this point I have no idea of price). The back has a fab graduated blue black metallic appearance, and a simple HD in the middle.. (I guess it does 720 or 1080 video?). I hunt for the battery and prise the flimsy plastic back cover off, with difficulty. Fortunately nothing snaps. so I put the sim and battery in and fire the unit up. The  cover clips on well and I also notice a LED for the camera. On the top is a HDMi cover and usb conector cover, on the side  find the power button. The screen bursts to life and displays retina rivalling fonts and pixels. Impressive stuff. I swipe to unlock, (swiping the opposite way mute's or un-mute's the phone) and complete a quick 'get to know' your phone lesson. Timescape is present, (sony's twitter/facebook/message feed) Timescape's sits on the home screen, like scattered tiles you can swipe up and down through them to see whats happening in your 'connected life'! The main android menu's swipe left and right, much like a Samsung. Theres a nice big home button that appears mid screen to touch, just above the, er, home key. hitting a four square button makes the icons wobble so that you can move them around..... sound familiar, it should. It's eerie the way they move. Imitation is the highest form of flattery though! The button on the left in the menu, lets you re-order the icons, in Own, alphabetical, most used, or recently installed. Useful for when your handset becomes overridden with icons. Everything an android phone needs is here, GPS, compass, camera video, etc. Opening Maps highlights two finger gestures are made very good use of. Two fingers can; up/down = tilt the map. Spin = spin the map, and pinch to zoom. Impressive. It feels a bit more like google earth, than maps! Certainly VERY easy to navigate. Zooming in to birmingham city centre shows that 3D building mapping is integrated. Which looks fab. iPlayer works seamlessly. The speaker isn't bad either. The camera is excellent as you'd expect with a Sony product and the video is incredible. The most noticeable thing is that the image stabilisation works effortlessly and creates smooth professional looking footage. At first the image appeared yellow, but all of the settings (including white balance) are easily accessible and a quick adjust and things were back on track.
Typical android home screen customisation, music controls, digital clock, tips, iplayer highlights, it's all very funky looking and usable. There's a cluster of recent video and pictures which links me to an animated film which shows of the devices screen off incredibly well. The music player reveals the speaker to be pretty good. Overall, I have to say it, this looks like it could well be Sony's best handset for a good many years. Although I'm only scratching the surface, of late, that's been enough to reveal a very rough product. You'll see in the past I've spoken ill of Sony ware's. This, on my brief encounter, cannot be faulted. Wonderfully impressive stuff and a great return to form. It's also equipped with the wonderful sony in ear headphones.
Having checked the unit is 300 pounds on Prepay and available, initially from 25 pounds per month. There are far worse choices. I like it alot.
at June 29, 2011 No comments: