A few people have said to me recently that they'd like to watch Star Wars, but they don't know where to start. I get this, instead of a neat 4,5,6 part trilogy, (as it was last century) it's now grown arms and legs and my attempts to simplify it (I made a spreadsheet) only seem to cause more confusion. But recently, I saw things slightly differently that may help the saga become more understandable to an outsider.

So here's a brief summary of the stuff that happens and how you might want to watch it (Rated OK through to EPIC). It's assumed you know what a Jedi is, but a Sith (you may not know) is the Dark Side equivalent.

I've tried my best to be ambiguous to avoid spoilers.

Before we start - Clones, Stormtroopers and Droid Army's.
This can get complicated.
1) The Droid Army we see in the first films belongs to the Trade federation. They're used to enforce an illegal trade war against a small planet.
2) The original Clone army (the first to look like Stormtroopers) were made in secret from the DNA of one man. These were first put into action by the disintegrating Republic before it became the Empire. When it did become an Empire, the order was given to destroy all of the Jedi.
3) The Stormtroopers were the replacement for the Clone Army and have always been the strong arm of the Empire.

This is why in the prequels, you will see good folk, fighting alongside (what appear to be) Stormtroopers, but later on they're fighting against them.

Episodes 1-3 - The Phantom Menace, Attack of the Clones, Revenge of the Sith. (OK)

In a nutshell, this trilogy which was made around the turn of the century is the story of Anakin Skywalker and how his journey goes from innocent (but gifted) slave-child to become Darth Vader.
There's some complex politics as it also describes the birth of the Empire (dictatorship) and the death of democracy, decency and a desire for fairness and equality (the Republic). This is due to some clever politics played by a seemingly good ambassador of the Republic, Palpatine, who is actually just a career politician with some dirty secrets. (I'm simplifying).
It's the first story of how temptation can lead us to dark places and how selfishness and greed can ultimately become our downfall.

This standalone film made in 2016 explains the origins of the Death Star and how the Rebel Alliance came to possess the plans, and find a weakness in the design. There are a few crossover characters from the main story who play a part in this film. Paths cross as the powers that be attempt to prevent the theft of the plans. 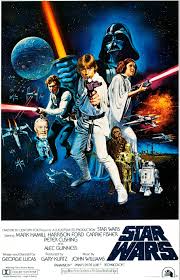 The original trilogy and still the best in my opinion, this is the story of Luke. We understand from the prequels why he's on a desert planet, but in this trilogy his journey to becoming a Jedi is journaled. The Rebel Alliance are evading the Empire with setbacks and wins, but ultimately it's the story of Luke's attempts to defeat evil and avoid the temptation of the dark side with Ewoks (think teddies).

This trilogy is (so far) the story of Rey. Of unknown origin, she possesses the power of the force, but doesn't know how to use it. We also learn the backstory of Ben Solo, Son of Leia and Han, who possesses the Skywalker blood, but was lured to the Dark Side to become Kylo Ren. He's Darth Vader's biggest fan (or 'Grampa' as Ben probably called him), no one knows how, but it would appear from the trailer for 9 it's something to do with Palpatine.

Simply the story of how Han Solo came about, how he met Chewbacca, and how he acquired the Millennium Falcon. Of no significance to the bigger story.


So, there you have it, the three trilogies really just track the lives of three individuals in the Star Wars universe.
Anakin - 1-3
Luke 4-6
Rey 7-9
Rogue One is a key element of the story, but best watched as a stand alone film.

Solo is a little self indulgent, perhaps, for die hard fans only?

My advice -
Start with - Rogue one, A New Hope, Empire Strikes Back and Return of the Jedi.

If you still want more
The Force Awakens, The Last Jedi (and wait for Episode 9 in December)

And if you still want more
Phantom Menace, Attack of the Clones and Revenge of the Sith, then Solo if you're 'down with it'!

May the Force be with you.

PS. The Mandalorian is a film scheduled for next year (I think) which is simply the back story of Boba Fett, a popular Bounty hunter from the series who's Dad, plays a key part in the development of the original Clone Army.