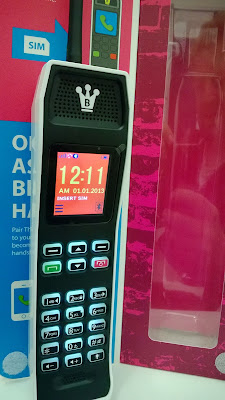 It's not often we get something in genuinely unique, based more on style than functionality, but this week we have just that. The Binatone Brick is modelled on the Motorola DynaTAC, which was unsympathetically nicknamed the brick, because of it's sheer bulk. Having said that, at the time, it was a massive leap from the car battery and curly cord affairs that were lugged around by the 80's 1%! This handset is, frankly ginormous by todays standards. You can, if you choose, put a sim card in it and use it as your main phone. Or if you prefer, you can connect it via bluetooth to your smartphone and use it separately. It wedges beautifully between your shoulder and head but is not a road legal handsfree kit.
It's compatible with the 2G network, so is capable of sending SMS messages as well as making and receiving calls. It has digital call quality so calls are clear and hiss free. Not only that, but, it has a memory card slot.... It includes a music player, although ironically, it doesn't have a headphone socket! However the speaker is clear and bright should you wish to listen to A-ha, Kajagoogoo, or Queen. This phone isn't subtle, if, in the highly unlikely situation you were ever turning this device on in an Airport, everyone around you would expect flight information to follow, it makes that exact noise; loudly! The menus are clear and simple, anyone who has owned a 'normal' phone in the past 18 year, will, without a shadow of a doubt, pick this up and use it genuinely easily. For some customers, with a sense of humour, this genuinely could be all that they actually need. In true retro style, the battery life is phenomenal. The default battery, (which looks like a cheap nokia clone) will last on standby for 1 month! As additional accessories, they have XL and XXL batteries which will last up to 3 and 6 months respectively! Half a year standby off one battery charge! It has a USB port in the side of the phone for charging. Finally, it also has on the top of the phone a Torch. It's clearly not for everyone only those who are comfortable being laughed at. But, as a novelty item, it's surprisingly competent. Do I want one. No of course I don't. 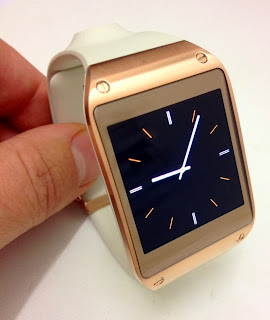 We had the Sony Smart watch in some months ago, however, it wasn't a great experience. To start, the watch looks cumbersome and plastic, the screen resolution was poor, the functionality clumsy and the effective usefulness virtually nil. I wore it for a day or two, then realised I looked like an idiot and it did nothing I want, so it's sat, unreviewed on my shelf ever since, gathering dust. Sadly now, I no longer use an android handset, but the Samsung Galaxy Gear really makes me wish I did. Sure it's not perfect, but look at it! Even James Bond never had a watch this cool. The appearance of the white strapped, rose gold version that we have is clearly a subjective issue, but so far, everyone that has seen it in our office is a fan. The screen is also strikingly clear. Set up is a little tedious if I'm being honest. Initially it had nil charge and, once we'd put it in it's bulky charging clamp bed, it didn't even appear to be charging; but it was. The odd clunky charging clamp bed enables the device to use NFC to communicate with a phone, however, the strap is pretty rigid and trying to use NFC to get the back of something like a Note close to the back of the unit is a pain.... especially if you haven't realised the strap will open fully (we really struggled). We also found, although NFC made the odd noise, it didn't allow us to connect as seamlessly to the device as it should have. Eventually we gave up and just connected it (via bluetooth) the traditional way. Then, the watch sprung into life. From the Samsung Gear app on your smartphone, you can choose the watch style, (analogue looks best), you can determine your location for the weather app and you can customise the appearance of the watch as well as set it up for notifications, transfer photos, set up the pedometer etc. There is really alot loaded into this watch to keep the most tech savvy geek entertained for all of Christmas day. Remotely controlling the tunes on your android phone is perhaps more impressive than it is genuinely useful? But swipe up on the clock and the voyeuristic magic really jumps into life. The Camera on the front offers 720p recording quality for video, or a 1.9mp camera, which produces better results than that sounds in our megapixel obsessed world. The main irk with the Sony watch was the lack of it's responsiveness, I'm not sure what processor was in it, or even if it had one, it seemed to work off hope. But this watch (if not immediately obvious, uses a touch screen) is quick to respond to gestures. I'm pretty sure we haven't fully explored the potential of this device, hell, we may only have scratched the surface, but already, it has that desirability that was missing from the Sony. This device is sleek and sophisticated, the Sony was trying hard, but ultimately falling way, way short of the mark. The unit has a microphone, it will allow you to send 'Siri like' voice commands to your phone, there's a massive array of digital clocks to choose from, some of which, combine the weather info. It alerts you to missed calls. S trainer tracks your progress on runs and tells you to speed up or slow down. You can preview messages from text or email, you can answer or decline calls from it, view your call log or photo gallery. Access facebook, your contacts and I am certain, that they'll be adding more functionality to it in the future.
A couple of things from the user manual that did grab my attention, firstly, it warns users not to keep it in their back pocket.... like you might with a mobile phone. I guess kids struggle to understand the concept of a watch, so maybe that is necessary for Samsung to point out and finally, for the more intellectually challenged, assuming that they can read the user manual, it also makes the point (seriously) "Do not bite or suck the device". I think that means, it's not a perfect gift for a 2 year old?
These warnings aside, the unit is uber cool. The watch is really smart, genuinely useful, cool and expensive, which makes it highly desirable. I like it, alot.
at October 22, 2013 No comments: 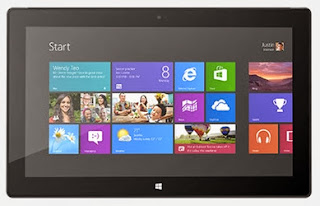