In 2021 UK drone regulations are changing in a significant number of ways to bring them more in line with the EU.

With a number of caveats, Permission for commercial operation (PfCO) is no longer strictly required, although to acquire aerial images and/or video, insurance will be. The law still requires that pilots of larger drones, without PfCO, maintain 50m clear of buildings, people, property (such as cars) and 150m clear of urban, built up areas and do not fly over crowds of people ever, however if the drone is under 250g those rules do not apply, quote 'for short periods of time'.

Verbatim, from the CAA "The (new) rules are based on the risk of the flight; where you fly, proximity to other people and the size and weight of your drone"

Pilots who have previously passed courses and flight tests might well find that their insurance quotes are significantly less than those who have no experience or qualifications. I have had a quote for one days work which has encouraged me to write this blog and share it with people with whom I've worked in the past. Having acquired an incredible drone that weighs less than 250g that's capable of half an hours flight, has return to home functionality will record super clear imagery in 4k at 30fps, or 60fps at 1080p and relays those images back to the controller at 720fps we are very much back in the aerial imagery business.

This makes a lot of sense and is incredibly welcome news. The risk from a responsible pilot from flying a drone under 250g within a ceiling of 400ft and within Visual Line of Sight. (VLoS) is ridiculously low. For estate agent work, or a business/school just wanting a picture or incidental B roll footage for a 15 minute flight, passing the tests I did and writing and renewing a 40+ page operating manual seemed like overkill, which is why I left it behind. Although there was a risk the drone may have caught the wind, lost all contact with the controller and flown towards Broughton Airbus, the probability was almost nil. I did always have Hawarden phone number handy though.

This means any keen videographer or photographer now has the ability to add aerial imagery to their repertoire, and honestly should. My advice to any potential client hiring a pilot, in order to stay legal, you should ensure that your pilot/photographer is insured for the day you want them to work.

If you're thinking your business might benefit from owning a drone to complete the occasional task then to be clear, none of the above is legal advice and you should definitely familiarise yourself for your own satisfactions with the 238 page CAP722 publication from the CAA which can be found here.

Insurance can be obtained from specialists such as Coverdrone. A brief overview of the changes being introduced is available from the CAA publication CAP2005.

Google are losing all of their Unique Selling Points.

There was a time when you were looking for a technical solution that Google had a handy and convenient answer.

Music, Photos and Files. Google had the solution, but as time has passed, all of these solutions are now past their best. Let's have a look at what they were and why they're no longer worth our time. 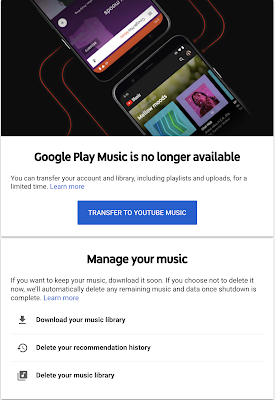 This used to be a great way to sync/backup your music collection and stream to your mobile device without eating into any of the storage on your phone, Great when storage was only 8 or 4Gb. You could also stream audio, from your laptop or device to your Chromecast plugged into your hifi at 320kbps and browse your collection with ease.

Google Music is dead though and has now been replaced by the much more inferior YouTube music service. Much like Apple Music and Spotify, primarily it is now a streaming service you pay for. While you can transfer your files across from Google Play Music, the interface is aimed at the subscriber, and limitations on bit rate and streaming make it impractical for the audiophile who prefers to own their digital music collection. Searching through your music is difficult and presents you with the music video or youtube version of songs you already own. It also renders your Chromecast devices useless unless you pay for the service.

We were conned into thinking Android users had a music USP over Apple. Storing music on your phone again and synchronising with your PC is now the best way to look after your digital collection without paying, buy a big memory card. 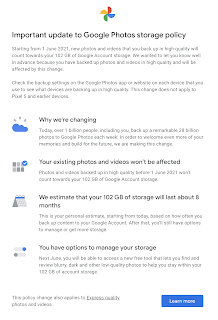 Like Apple Photos, Google Photos backed up your entire photo collection to your online storage space at photos.google.com however, come June next year, the storage you had will now be frozen and your allowance will be taken from your Google Drive. 15Gb (the free allowance you get) could last a year or so if you use your android device like most people, you're either going to have to delete your memories, or pay for more upgrade space.

Again we were conned into thinking Android users had a USP over Apple, and sadly people's precious memories are likely entwined in a service that is soon to become an archive.

This has been the biggest disappointment as it's been a vital, useful and essential tool for me and some of my work colleagues over the past few years. But by gawd they've created a monster. If you work with people now and you have a large workload, for goodness sake, think twice about how you share it. The complexities of a shared folder are immense. I left a partnership earlier this year and they, and myself are still encountering detritus which doesn't show in the usual 'shared with me' or 'My Drive'. I have removed myself from folder shares, but still have access to all of the contents of items within that folder. I have removed myself from shared items and found others have lost access too. I have removed items owned by other people from my own drive (everything still shows up in 'storage' and 'search') and found it's caused problems for others in the share. It really is a mess. Drive is cheap, there's no doubting that, and for short term sharing, projects that are time bound and can be deleted and moved on by 2 parties it's ok. But for teamwork, it's atrocious, Unless you buy a G Suite package for your work and control multiple logins for each user (giving each user corporate logins instead of their own) then it's hopeless. For freelancers and cohorts it's dreadful.

Although it's pricier, I suspect Dropbox might manage folder and file permissions better, does anyone have experience of using Dropbox professionally, it is better?

As for Google, I have been an ambassador in the past. For many many years I've pushed their services. Back when I worked in Sales I explained to a fellow music lover who was buying a phone how great Google Music was, he agreed but said something that stuck with me, he said

"It does look great, but just wait till they've got you and they start charging for it" it would appear I'm not as cynical as I thought I once was, in fact I was far too trusting. It woud appear we can no longer trust Google at all.

You get what you pay for, the shambles that we're given isn't a professional tool, it's chaotic when you come to 'un-share' complex folders with other professionals. It came so close and much of the functionality still works for schools, and business establishments with a G Suite domain. But folder hierarchy complexity makes it impossible for any geek to recommend to a cohort of fellow freelancers, it's just too goddamn infuriating to undo. It's like Brexit, only digital.