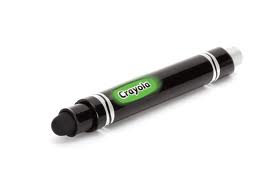 The Crayola Colorstudio HD+ is a big chunky pen designed to work with the ColorStudio HD app available for free from the app store. A number of users complain that the pen isn't responsive enough, and to be honest, from my first attempt, I found that was true as well. The pen takes a single AA battery and has a button at the end. I also thought the switch was faulty as it doesn't 'click' like it looks like it should, (like the click on the pen) however, when it's turned on, the light on the side illuminates, and if you hold it to your ears, you can hear it making a strange electrical sound. To prove you haven't just downloaded the free crayola app to use with your finger, you have to unlock it, using the magic pen. However, this is where you find out how to use the pen. Despite having a lovely round end. It only really registers if it's pretty much perpendicular with the surface of the iPad. You also have to press quite hard for it to register. After loading a couple of pictures, I started colouring in. It doesn't take much getting used to, and within a couple of minutes I was colouring like a 5 year old. There's a crayons box at the bottom and brush sizes to chose from. When the crayon palette opens, you can whizz the crayons round on a wheel to choose different ones. Although the felt pens only have a few colours to chose from. (Crayons has the most and there are plenty). What I do find odd is that there is an option to upload your creations to Facebook, bearing in mind the target market for this is probably not above the 13 year limit placed on Facebook users. What is quite cool, that I guess younger kids will really like about this, is that the pictures themselves are animated. They also have music and sound effects, but fortunately they can be turned off. You can also set it to 'stay within the lines' so if you're not that good at staying in the lines, your pictures will still look respectable, as it won't allow your scribble to go over. Overall, I'd say this is a fairly good product, I couldn't imagine, young kids having too much trouble using it, but I doubt my 7 year old daughter would be entertained by it for longer than an hour, at best. Really it's for younger kids, and to be honest. I'm not sure I'd be too happy to let my young kid press hard on my iPad screen with a rubber tipped pen. I dread to think what would happen if a small amount of grit got under the nib! It does what it promises though, although it could be easier to use. The app works much better (as the iPad was designed) with your finger. There are also free colouring apps, that are easy enough to find (sort by customer rating and free) that do the same thing for nothing.
at June 21, 2012 No comments:

We got these in a couple of weeks ago and I completely overlooked it. Then a customer bought one and promptly returned it. There seems to be a flurry of reviews on other websites complaining of basic functionality and incompatibility, especially in the UK and with Sky+ boxes. With that in mind, and because we're selling them. I thought I ought to investigate. So I have. To get it working, you need to download the free Digit app from the Appstore and pair the beacon with your iPhone. I'll be honest, initially, I had a couple of problems getting the app to recognise the fact that I'd linked the device via bluetooth. I didn't read the instructions, but eventually the app saw it and I was ready to continue. I added a couple of devices and familiarised myself with the app layout before bringing the item home to test. At home, I'd got the Panasonic TV right, it worked straight away, but sure enough, the Sky choice I'd made didn't work. I clicked the help me choose option and skipped through a few Sky satellite choices that didn't work, then I found one that did... But the mute didn't work, so I continued exploring until I found number 15. Which worked, so I clicked the "use this one" blue button. I added my Dvd player, and Amp. Then started exploring. I found options greyed out, but to be honest, they were irrelevant. For example, track skip whilst watching sky. It wouldn't do anything anyhow. Everything, and I mean everything else worked exactly as it should. As for limited functionality, I found the menu button, record, fast forward, pause, Info. I couldn't think of anything that it wouldn't do. You do have to tap the play button to show full controls, like FF, REW, Pause etc.
Then I discovered the 'activities' button. This idea I believe has either been inspired by, (or ripped off) by logitech. Their Harmony remotes are truly fantastic, but a little long winded to set up. The idea of an activity is that you tell the device that you want to watch TV. It asks some simple questions, for example, what devices controls the volume, which device changes the channel? Then a new style interface comes up, offering full functionality over everything relevant. It wasn't quite as good as the logitech, as the Harmony remotes will ensure that the Tv and Amp are set to the right input. Although this is much more complex to set up, it does work better in the long run. The activities on the Beacon remote simply power the right devices up. Perhaps this will be something that they release in future updates... Griffin? From the App you can also check the battery levels of the remote. Overall, I have to say I am mightily impressed and it worked far, far better than I expected. If you don't fancy the idea of taking out a second mortgage to invest in a top of the range Harmony remote, then this comes a pretty close second. not quite as good. But for the money, a top buy. Highly recommended. I do think it would be improved if it has a little fountain coming out of the top though. And it was mains powered instead. Pretty little gadget though. Perhaps they can add a water feature in a future update?

At home, I occasionally use google chrome. I don't find it as good as Safari, so to be honest, I've only dabbled. Perhaps this is where the problem came from. I've signed in using 2 accounts. A team account that I created to let my team view work documents and an administrator one that I use to edit and create documents. The passwords are different. I have logged in and out on both accounts, but it would appear that, at some point, I signed into Chrome (not simply google) using the team account.

At some point, Chrome has decided it will collect, group and remember all of the passwords that it sees. Including my (different) personal account.

Today, my team have set up a new computer at work and signed into chrome using the team account. Unbeknown to me, on a computer that I've never sat at, that I've never entered my password on, by default, my email address AND password both auto populate the sign in fields!

Now as if this wasn't bad enough, trying to disassociate the two is also a nightmare. Fortunately, I work with a very tech competent guy and eventually we managed to disassociate the two. Now, Chrome doesn't remember my password and I guess I'm a little more secure, but wow! There's a lesson I won't forget in a hurry! I'll also be steering well clear of Chrome with my own personal account.

The geek laughed it off and told me it was naivety and that I've not known what I was doing, however, I beg to differ, I didn't expect Chrome to remember all of my passwords on a separate computer!

I got really excited when I saw these, they work using Near Field Communication (NFC). The tech thats behind cardless payments systems. To look at, they look like key rings. So I jumped to the conclusion that perhaps your phone would keep an eye on your keys, your wallet etc? No, thats not it at all. These funny looking sticky tabs stick to your car dashboard and allow you  to personalise your phone for the different environments. So for example, in the car, you may want wifi off and bluetooth on, in the office, that could be opposite. In the toilet, you may want youtube to start, or a news app, depending on what you do in the toilet?

So, perhaps of some use to someone, but not as handy as I'd thought it might be. Would you buy an Xperia, just so you could do this?
at June 13, 2012 No comments: