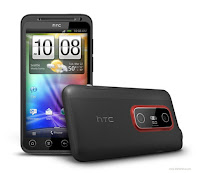 Hot on the heels of the LG 3D is this offering from HTC. On the face of it, from the front at least, it looks just like any other HTC android phone. It's smart and the screen is very high resolution and clear. The menu's are the usual neat HTC affair, but unlike the LG there is no 'magical 3D portal'. In fact the only function on the handset that we can find is the camera. Now there are a handful of 3D pictures in the gallery to set you off, but we found these a bit hit n miss. There is no 'tuning' of the 3D like there is on the LG and several of us to start off with were a bit perplexed with the 3D effect. Initially its a little nauseating. Then, on one or two of the pictures, you'll get it. The sensation is very much like the moment you get a magic eye picture. One of those old garbled pictures, that eventually 'pop out' as a 3D cut out. Many people could never get the hang of those, so I guess, this could end up being the same? Some people may not ever be able to see it. Then again, when we went outside and took a couple of photo's of the car, these seemed to work particularly well. Yet inside, a palm plant was unrecognisable. The video is less convincing. Jerky in it's playback, it's hard to hold onto the 3D-ness of a film. Unless the camera is still and the motion slow. Like a flower blowing in the wind perhaps. Actually, I tried that and it was rubbish. Traffic driving by was pretty good. Initial tests seem to show scenery and things further away from the lenses are most impressive. There is a film rental service on the device and three trailers to get you started. Disappointingly, none of these are in 3D and because of a connection issue, I couldn't browse any others. So I navigated my way to youtube and looked at there setup page. There were a couple of options for glasses, but as this is a glasses-less device they weren't applicable. Interleaved is top/bottom (for TV's?), not side/side so that didn't work. side by side just showed two separate images, side by side and HTML5 didn't work either. So it seems incompatible with youtube's growing 3D content. So I looked on the market place for the phrase 3D, but it's so overly used I was presented with too many options, none of which looked hopeful. So I gave up and I guess that wraps up the review. Oh, it has a front facing camera as well and some nice mock 3D effects (unlocking and entering menus....by mock, I mean that aren't real 3D). Pinching the screen while the menu's are on, moves each screen around wildly, albeit in 2D.
Its another nice new HTC Android phone, with a 3D option for your own photos and videos at a push. But, seemingly no 3D games (as yet) nor 3D films either. As the tech becomes commonplace soon, all devices will be 3D, but unless they start focussing on the content a bit more, it'll be a bit of a let down.
'Sigh', or as another team members perhaps phrased it better 'Meh'.
at August 19, 2011 No comments: