We've had this unit in for a while and never really used it. It retails at around £80 and should be capable of receiving freeview TV broadcasts through a supplied antenna. Inside the box we found a USB cable, a small magnetic based antenna and a small telescopic aerial. We downloaded the elgato eyeTV tuner app and booted it up. It asked us to plug the device in, but it already was. Here comes disappointment number 1. It's not powered from the iPhone socket. We plugged a USB lead into it and the red light came on. The app recognised this fact and we scanned for TV channels. Unfortunately, indoors, we found nothing. So, I took the unit, along with my Mac that was powering it, outside and I stood in almost zero temperatures to scan again.... and again. But alas, with no joy. Disappointment number 2!
Undeterred and with almost child-like enthusiasm and optimism, I took the magnetic aerial out, plugged it into the device and plonked it on top of my car. Where I sat, in freezing cold temperatures again, scanning for the 5th or 6th time. Then the progress bar froze, then BBC1 appeared, then BBC2, then 77 other stations, some of which were radio. However, it appeared that all of the Freeview channels had successfully tuned in. Once the scan was complete, I was offered a list of channels to choose from. I tapped the first and the Antiques roadshow came up, then I swiped from left to right (it was a guess that worked) and BBC2 appeared, Life on Earth. The quality was really good and the controls easy to understand. You can also rewind up to 30 seconds of live TV and record programs to watch later. I found Dave and (obviously) Top Gear. Dave ja vu, Cbeebies, BBC News, they all seemed to be here. But by now, my hands had turned blue, so I declared it a success and went back in to warm up. Does what it says on the tin, eventually. It also transmits to Apple TV. Is it worth £80? Perhaps if you're a TV junkie. I know people like that, but even they think it's expensive.
at February 08, 2013 No comments: 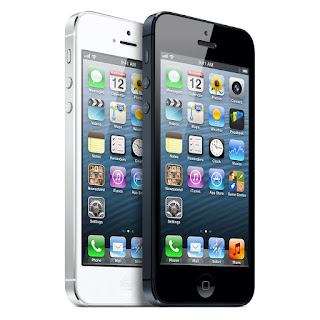 I honestly thought on the first day of launch, when our demo iPhone 5 showed a scratch on the metal band that this would be a massive problem. Then I saw the problems with the units bending and I thought that this would be a disaster too. An aluminium band as the main support around the outside of an iPhone? Compared to a steel band on the iPhone of old! Surely some mistake!? It's so light by comparison, but at this cost?
Well, no, although we have has a couple of people complain about the black paint chipping on their black iPhone 5, it's had very little actual impact. In relation to handsets bending, we've had no complaints at all. None, not a single one, not even an insurance claim. And we've sold lots and lots and lots. Well done Apple. It seems it's all good.
at February 07, 2013 No comments: 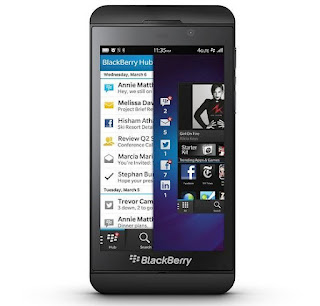 There are very few reviews of Blackberry smartphones on these pages. To be blunt, they wouldn't be very favourable. Anyone who knows me will tell you, I'm not REALLY a fan. In fact, I've hated them, even the handsets that have been given to me, with a connected sim card, with the blackberry service enabled. I loathed them all. The Playbook was ok, I quite liked that. But it wasn't quite as easy to warm to as an iPad. This, well, it's a different beast altogether. Firstly, it's too big for me to to use as a day to day phone. I wouldn't have one for that reason alone. Which, is something of a shame, as the handset is an absolute corker. Within 10 minutes of flicking back and forth between the HUB, the last used apps and the main menu. You'll feel at home. It's a very easy handset to get used to quickly. The Icons are very Apple-esque, but the transform effects are very slick. It's a nice handset to use. The cameras face detect and smile feature is a blast. It's well documented all over the internet, but I can confirm it works as well in real life as it does in the promotional videos. After using it for a short while, it feels like your main menu is on the right, your 'hub' or message centre is on the left, and the main screen is your 8 last used apps, each of which fill 1/4 of the screen, over 2 vertically stacked pages. The App store is still a little flaky. Although Blackberry tell us that the apps are simple for developers to port onto the blackberry store, so take up should be good. Having said that, all of the popular apps ARE pretty much available now. Facebook, Twitter, etc.  But at the time of writing, many apps like springpad and Sky are not. The text input is perhaps the best on the market. Android does have third party apps that make text input easier, but they're not always free, and they take more time and effort to get working. The blackberry tect input is 'straight out of the box' fresh. The way it works is that it predicts a few words that you're likely to type, and displays them above the relevant first letter of that word. You simply swipe up off the letter to select it. It sounds good and looks good on the advert. But it works even better in real life. I do think Blackberry have finally got it right on this one. Not everyone will want one, but I hear more and more people moaning that iOS is becoming a little stale, they fancy a change. So perhaps this will take more of the Android and iOS market than initially thought? For me, it's good, but it's not something I would choose to spend my own money on. But unlike previously, I'd respect someone's opinion for choosing Blackberry. This is a really nice handset, very intuitive to use and with some great features. Smaller Blackberry 10 devices will be worth a second look! Blackberry also went up in my estimations when they chose Elephant by Tame Impala for their TV advert! Kudos!
at February 07, 2013 No comments: