When things get really bad, there could be a number of things that someone might think.


All of the above statements could apply equally as much to someone suffering from poor mental health, as someone playing a computer game.  Never has this been made so pertinent, than it is playing Hellblade - Senuas Sacrifice. Not only is this game arguably the most impressive graphical work on sale for the Playstation, it's also one of the most in depth when exploring the links between mental health and the motivation behind completing computer games. Sometimes the link smacks you in the face (fighting demons for example), at other times it's more subtle. This subtlety shouldn't be lost on most players, there is no health bar, there' no distracting head up display on the screen, this is a unique gaming experience.
The fight scenes, (with the demons) have brought back an element of gameplay that I've not experienced since 'way of the exploding fist' in the mid eighties although the commands are basic 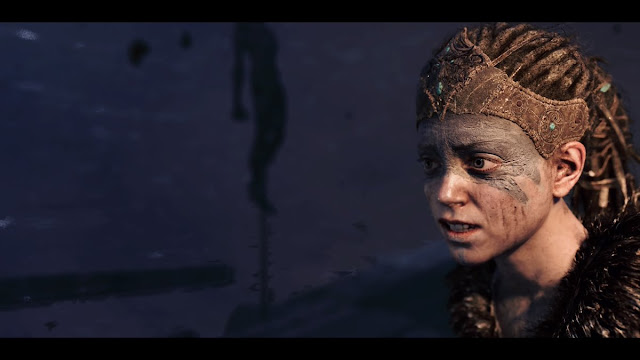 When you face your demons (in the game or real life), you need to remember that looking after your health makes most sense, or just avoiding trouble, (dodging or defending) but sometimes you will see an opportunity and you must strike. During combat (in the game now) you will hear voices; lots of voices. Self doubt, assertion, fear and a gamut of other emotions plague your mind with unrelenting advice. Sometimes it's essential to listen to your inner voice, in order to win,

"Behind you!"
"Run away",
"She's not going to make it"
"Strike now"
"She's going to do it"
This audio accompaniment and the quality of the voice acting, adds depth and quality to the title and makes the fight scenes as immersive as you can imagine, added to the simple and basic fight commands, Senua makes for an unforgettable (if short) experience.

I was asked recently why I played computer games, what did I get out of them? I;ve given this much thought over the last few weeks. They're my mindfulness, they're my escape. On face value, while many might see computer games as vapid and pointless, for me, they run much deeper. In the best, most rewarding games, tactics, strategy and intelligence play a big part in accomplishing goals that at first might seem incredibly difficult.

Almost all of the opening statements can also be applied to less complex or less morbid games (for younger audiences) like Minecraft. While Hellblade uses grotesque imagery and photo realistic scenes to illustrate the dark times. Minecraft uses far less intense lego-like zombies, skeletons and more simply; the night. Feeling lost, feeling like you've nothing left to lose (and still finding the motivation to carry on) are common whilst playing both titles.

Most of us simply don't need computer games to tell us how to behave in real life or to keep us motivated. Well balanced children and adults, get this link. But undoubtedly, some children don't learn these lessons and I wonder whether there are opportunities to link the two together. I know of a number of children with 'real life' behavioural issues, who have mastered the art of stealth (From games like Horizon or Metal Gear Solid), knowing when being quiet and staying calm is essential to game progression, but who simply cannot stay calm in real life situations.

Maybe, there is a way, or an opportunity, to link the two extremes to help them?

To use these skills they've learnt while gaming, such as tenacity, control, hope, managing fear and coping with anxieties to help them in the real world?