Firstly I should say, "Sorry"; to Palm. Palm sent us a complimentary handset some 2 or 3 months ago. A fellow colleague quickly made it his own and gave us all the following review, "It's ok".
Which technically is true. It is ok, but it's also something a bit special that I fear we may have overlooked.
For a start, it has a glowing, almost mythical, white nipple (its not a 'ball' as it doesn't appear to roll!) at the base of the screen, with two lights either side of it, that pulsate from time to time. The phone has some odd, but intuitive features. Much like the Sony Ericsson's old dedicated  'Bent Arrow','back' button, the Palm Pre asks you swipe right to left just below the screen to perform the same function. This tactile motion brings you closer to the phone and after a while, becomes familiar and natural. The phone will also 'multi task' relatively easily and simply places each open program window next to each other on the home screen. When no program is running however, the home screen is pretty much a drab vacant affair and defunct. It doesn't appear to be customisable. It only has the 4 or 5 icons in the dock at the bottom of the handset which can be quick launched, and changed if desired (facebook app anyone!). Otherwise, there is nada to see!
When you do have programs open, closing them is one of the coolest things on the phone. You simply swipe your finger up over the magic glowing nipple, this takes you back to your home screen with the program screen reduced. To close the program, you simply throw it, with your finger, out of the top of the handset. The other programs neatly regroup (assuming there are some others open), to re-fill the gap left by the program you just killed.
The main menu is simply launched by pressing the icon that is half arrow, half house (see pic) or swiping up on nipple on the home screen. This launches 3 screens (scrollable left/right), two with apps and the right most for settings. Apps/icons can be dragged where you want them in an iPhone like way to any other location or screen. No phone is complete nowadays without a fully functioning App store, however, and the Palm obliges with it's own "App catalogue". Palm's selection here seems less than Android and clearly years behind Apple's, but there is plenty here to keep the casual phone user busy (including a "Violent Games" category!). There is the obligatory facebook app, although this doesn't appear to be as well developed as the Android and Apple versions. The "App catalog" store is well laid out and very simple to navigate, review apps, prior to installing, and install them straight to your handset (some apps have demo video's too, which is pretty neat). Installing apps, is Android like and better than the iPhone, in as much as you're not ejected back to your home screen whilst installing (take note Apple!) Deleting Apps is easy as well. Tapping the top left of the handset (which feels very 'mac-like') opens up sub menu's with options to copy and paste data, edit program preferences etc. Tapping the top right opens time and date settings, shows you battery %, the wifi network you're connected to and allows you to trigger airplane mode.
I noticed very early on that the corners of the display are so curved that a significant amount of video or photo's would be missing, when viewed back, however, this is purely an aesthetic element as these corners 'square off', quite stylishly, when a video plays.
The phone also has a wealth of help video's and I noticed on one, that there is a superb "powermat" style charging base unit for it. Disappointingly I can't confirm whether this cool accessory is included as I have only brought the handset back to test this evening (I haven't even opened a user manual yet, which I guess illustrates the intuitive nature of this handset) I will update tomorrow when I find out for certain if its included.
The Camera seems decent enough, the flash is the standard LED affair, which does a reasonable job, although indoor flash pics are a little grainy. The video recorder is ok too, and does better indoors in low light than the camera does!
Photo viewer is as good as can be expected, Texting (is chat like), the web browser has the now almost traditional pinch and zoom and tapping to zoom to text functions and works as well as you'd expect it to. There is a music player which does what its supposed to. Google Maps is present, but lacks the non essential, but increasingly useful street view (the first minus?) Youtube App, PDF viewer Calculator etc are all present and correct.
Overall this phone has surprised me. I have warmed to it alot this evening, the more I use it, the more I like it. Palm have made a product that you will quickly start to form a bond with. It lacks some of the wow factor of the HTC Desire and iPhone but its a great designed little unit (you'll notice I've ignored the 'blackberry-esque' rubberised tiny functional sadly essential keyboard from my write up) that feels great in your hand and superb to use for the most part.
The problem with the handset comes down to price. It's a Nissan GTR competing in Porsche territory. To date it's only available on higher tier tariff's and when thats your only option to get one, its by no means the sane man's choice. The HTC desire is available on cheaper tariffs, the iPhone is available for the same money. If this was competing with the likes of the Tocco Ultra and the 5230, it would wipe the floor with the competition. Against the iPhone and HTC products, it all feels a bit fisher price. Simple and effective yes, but not quite desirable enough.
at April 20, 2010 No comments: 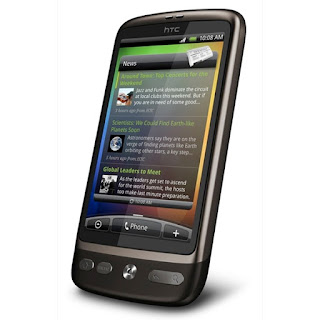 There would be little point in HTC loaning us one of these little beauties if we weren't going to spend some time giving it the once over and letting the world know our thoughts. There's a mountain of things to say about this phone. So I'm going to whizz through them point by point so its not too boring. I've limited myself to 30.


Although there are quite a few negatives in the above brief summary, the handset is, as the name suggests, very desirable. The new Android OS is a real pleasure to use. The handset is almost identical in size to the iPhone. The screen looks great and the ability to choose what capacity you want it to be is a major benefit. The Camera is good, its easy to use. Putting my iPhone sim into it was a painless process. The phone configured itself for the o2 data and as a previous Gmail user, the auto setup made using the phone Childs play.


Far simpler than any Blackberry or Windows phone to use, but still not quite as easy to use as the iPhone.
If it synced with itunes and I could hook it up to my Ipod car kit, I'd be seriously tempted. But it doesn't, so for now I'll stick with the 3G and wait and see if Apple have anything up their sleeve for this summer.
If you want to be different however, and have been looking for something equal or better to an iPhone. This is a tremendous handset, make no mistake. Definitely the best alternative to date and arguably better? The HTC Hero was a great phone. This one is even tremendous. HTC and the Android platform going from strength to strength.

Oh, sorry, I forgot to mention, call quality seems pretty good too.
at April 15, 2010 No comments: