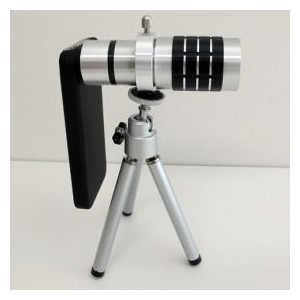 First up it should be noted that this is a telephoto lens and not a Zoom lens. So it won't allow a great deal of flexibility in terms of photography. For example you won't be able to compose a shot with 'a bit more sky' or 'zooming in a bit closer' on the subject. After breaking my way into the ghastly moulded packaging, I first took out the beautifully machined lens. This is very weighty and high quality. In terms of optics, it's good, for the price it is. It's clearly not intended to be in competition with high end lens manufacturers, but overall the clarity is perfectly acceptable. It has a twist to focus function that works well (although it does confuse the iphone auto focus a little). It comes with all of the attachments you would need. But with the exception of the lens caps, the rest of the contents really lets the package down. Firstly the tripod. It's a mini tripod, with a normal screw for attaching to the bottom of a camera. For any keen photographer who's needed a tripod abroad and been forced into a cheap camera shop, even though you may only have parted with a fistful of Euros, this tripod is the same sort of quality. It's really pretty bad. The iphone case is fair quality, but the thread (along with the rest of the case) is made of soft plastic. A bit of ham fisted attaching and I don't think it would be long before attaching the lens to the case would become a problem. However, this may not be a bad thing as on it's own, the little lens is far more impressive when held up to your eye. We spent much longer spying on the people across the road and reading car registration plates of passing cars through the 'telescope' than we did trying to achieve acceptable results with the iPhone. In a nutshell it does what it says on the tin. Quite who would have a need for this, I'm less sure. Peeping toms perhaps who live a set distance from the point they're trying to observe, I guess then it would be worth it? Or perhaps, birdwatchers who have feeders outside their back windows and no other means of photographing them? Perfect.   Dad!
at April 23, 2012 No comments:

You learn something new every day.

Can't believe I didn't know that you can format your text on iOS devices. By double tapping the word and selecting biu.

Doesn't work in all apps though.... Like blog press, (which I'm writing this on).

- Posted using BlogPress from my iPad 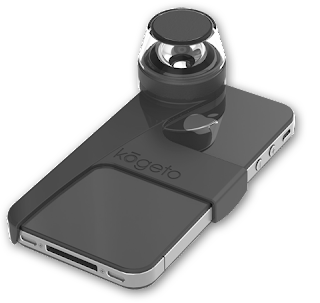 Oh the irony. about 6 months ago I emailed our buying team and told them about the GoPano 360, a device we ought to consider selling. Then when the buying team found out the RRP they decided against it, calling it a niche product, they were probably right. This week though, we've had this product in which performs exactly the same function... it captures 360 degree video. The two products seem to achieve the result in slightly different ways though. The strangely named Kogeto Dot seems to use a fish eye lens, where as the GoPano uses a conical mirror. Now before I need to explain my results, if you have an iOS device, you probably don't need to read on. Simply download the free 'looker' app from the apple app store. From here if you navigate to 'featured' and you'll see the videos that other users have uploaded.  Actually you can make your mind without an iOS device by looking at the videos on the dot website. However you view the videos though you will notice that they vary in quality. Some are quite fuzzy and difficult to make out. Others have a little more crisp results. I guess that the iPhone 4S with it's 8mp camera will perform somewhat better, however with the iPhone 4's 5mp camera the results I got were pretty dismal. However, I guess the same rules will apply to the GoPano. The app itself is very simple to use, however the calibration screen is particularly odd, easy enough to use, you simply need to move (using pinch and zoom) a polo shape over the polo part of the picture. Yet once this is done... you can't move it to the middle, or resize it. After calibration (correctly calibrated) my little polo was hanging off the edge of my screen. Yet in the example the polo is slap bang in the middle, and yes, I had clipped it on properly (ok, I didn't the first time, but it still wasnt central). The GoPano micro has a mirror so that you can see what you're filming whilst holding the phone upright (naturally); it works like a periscope. As you can see from the picture, the Dot needs to be held flat though which makes filming quite difficult and it also means a portion of your video will have the back of your phone and your fingertips in it. However, it does the same function for half the price of the GoPano, albeit with varying results. You can share, from the app, your results to facebook twitter etc, or upload them to the dot website. So if you have the need for a cheap 360 degree video in your life. It's perhaps worth investigating. If you can live with 360 degree stills, then I would suggest the fantastic 69p 360 degree panorama app. which can be downloaded here. If you need high quality 360 degree video's (lord know why anyone 'needs' 360 degree videos) Go Pano make top end models for DSLR cameras, but they're not cheap!
at April 21, 2012 No comments: