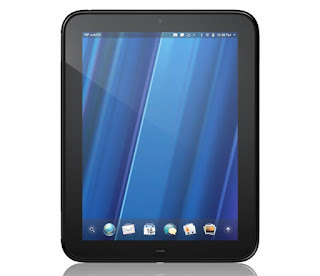 After an initially disappointing start to the day. I arrive in work to find the New HP Tablets have landed, or should I say; 'touched down'. Having been to the training for these several weeks back, it's great to see them finally land in store. Due for release to the general public on Friday the 15th, I think this could be the machine, to take the fight with Apple, one step further. The HP touchpa we tested was a prototype, with an OS that despite still in beta, was extremely slick with a number of neat touches, that make it stand out from the rest of the pack. The initial challenge comes in opening the box. The training materials etc all had magnetic flaps to secure them, this too appears to have a magnetic flap, but it's a decoy, it is in fact a slide out drawer. I succeed without causing the box any damage. On top of the box, the unit greets me. It's identical to the prototype and very iphone 3gs in appearance. Albeit far larger. But the back is sculpted in the same way. Without an accompanying palm pre, this will only be half a test, as there is interoperability across the two devices, that, (like the blackberry playbook) suggests it'd be best purchased as part of a bundle deal with the handset. For example Web URL's can be passed from the phone to the tablet, simply by touching the two devices together. For the time being, I'll have to see how it fares as a standalone product. To my delight, the unit has enough charge to power up. With just the small glowing HP logo in the centre, the initial impression (by comparison to a retina display) is that its pixelated. But this is an unfair assumption as the screen (eventually) lights up its WebOS welcome screen, it's clear to see it's excellent.  English>United Kingdom>tick>Select Wifi network>Accept terms and conditions and I have to create a HP account. But I can't, my email address is already associated with an account, so I ask it to resend me my password, but I can't, because it's not associated with an account. Doh.
I persevere and eventually. It's on. But it took far longer than I anticipated. Could be because it's a few days before it's official release? Regardless, it's restarting now it's finished it's lengthy setup process and........ wait......... wait..........HP logo is glowing (cue quick toilet break); we're in and it's on. The opening screen welcomes me with 6 icons and Just type at the top. Just type is HP's new way to do more stuff. Like spotlight on a Mac, or the start text entry on Windows. With just type, you can find programs, start a web search and link it with other apps, so you can send updates to facebook, or twitter, straight from the just type bar. I type "just testing the new HP touchpad" and I have the options to search maps/wikipedia/twitter/HP app catalogue. I press twitter and slide the screen up (during the detail entry screen) and like the palm products (and playbook) the window shrinks..... it's multitasking! Home settings>Wifi and I've switched wifi networks. It's highly intuitive. Swipe up, swipe up again and it disappears (with a satisfying woosh noise).  My twitter update, was in fact a search.... no one has updated twitter with this yet. I try and find a way to use just type to update twitter, (like we were advised would be do-able) but, I can't make it happen. I click on 'find more' to try and see if there is a twitter update app, but I get the error message 'unable to resolve host' (this isn't the wifi anymore, this is a problem).
There's no twitter app in the web Os App store.. I'm stumped. The only way to update twitter... Is by logging into the website? There are also other problems with some of the apps that came pre-installed, they have yellow exclamation marks next to them and clicking them enters https://index as a website url, which obviously, can't be found. This is looking sloppy! Downloads are failing and auto update isn't happening. Three days before launch, these sorts of problems shouldn't exist. The photos app isn't updating my facebook pics. Even when I log into a folder. Even though the internet signal is working fine. I boot up M racer and try and enter my usual screen name... it exists already. I get in making another one up, but the screen is tiny.... this is a Palm Pre game? In fact, it's not a racing game at all. Its a racing manager game... yawn! Delete.  I try to delete the errored apps, but they won't. Photo's have started syncing in the background, but it's very slow.
This is the biggest disappointment ever. This machine is looking more and more hopeless the more I use it.
I try something easier. I google iPlayer. I start iplayer.... it's struggling. Full screen won't happen. It catches up..... its running ok. I try another episode. Episode 2, where I missed the first 10 minutes. It works fine (with the exception of a lengthy buffer after 12 minutes). Success at last. The sound is excellent. Much better than any other tablets I've heard. It's a victory.
Truth is... it was hopeless.
Perhaps.... system updates.... Nope. It's up to date. I can't get in the app store. I can't do anything. I can't even get the dam thing to turn off. I reset using both buttons.... like an iphone, it works.