HP touchpad pt2 (after the reboot). 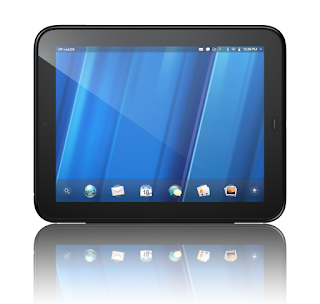 I really want this device to win, so after the reboot, I try again. I click on photos again, and we appear to have loads more thumbnails. The whole thing now looks much nicer. But there are still loads missing.
I click email, it's sync'd with most of my webmail, which is a massive account. (perhaps that was causing the issues?). Either way, I read an important email and respond. It's becoming usable and it's correcting and highlighting my mistypes for me. I 'star/favourite inbox and sent items and they're the only mailboxes that appear. Neat touch. I go back to the apps and all of the yellow exclamation marks have gone. I click the HP app store and it loads. Categories. Featured. Bookmarks. Search. It looks gloriously like the Apple app store. I search for twitter again and am disappointed to find, no app. I install weTwit lite. It's another Palm pre app, only half the screen size of the touchpad. I delete. I return to just type and type "this isn't going as well as I'd hoped" now, Facebook has disappeared... and I'm signed in under accounts! I double check and then click settings - Just type. I uncheck twitter as a search and click, 'find more' from the web os store. Facebook for Touchpad... Bingo(?) 102 review 4.5 stars 96% positive. It loads, it knows my sign in details. It looks sweet! Pages within tend to swipe right to left (to move them out of the way). I return to just type and find it! UPDATE FACEBOOK STATUS. Result. Feel like I'm winning. Email alert. It's coming to life. Finally. Reply to email. Hunky dory. It's syncing with Exchange 2003 really well. Back to just type apps and I think I've found my twitter answer in a program called, er, Spaz HD. Uhm.
I install it and sure enough. It gets just type working the way I thought it ought to from 'out of the box'. Spaz HD requires me to log into twitter and paste a code. Copy and paste work excellently and I'm in. Three neat colums show me Home, Mentions and Messages. Ooh, I have a new one. I delete the messages column and add favourites. Neat program. Oddly though even after a google search, I can't get update using Spaz HD to appear in the just type menu. I close the program and re-open. I go back in and it appears in just type preferences. Although it's not as slick as I'd expected as it DOES open the program to post. Not that closing programs is difficult. swipe up, swipe up. done. Photo's still syncing. I try to display one as a background picture, but end up opening a new email. I can move it to another folder. Or print it. No I can't, because my networked printer is Canon, not an airprint compatible HP one! Doh. Screen and lock under settings allows me to choose another pic. Only..... er, not from my syncing facebook ones. No matter, I choose a stock photo and it transforms the device.... why isn't one on by default? :/ I click the messaging icon, And click find more, there is nothing more in the app store. AIM, google, Skype or Yahoo. That's yer lot. I get an email from a mail user at work. Mine was gobbledegook. I need the ability to send plain text. Email, preferences, nope. Oh dear.
Programs take too long to open, perhaps I should stop closing them down.
The front page of the app store has a magazine, which showcases several apps, some of which show NA at the mo. So many of these pre installed apps are set to work in a tiny screen, much like the iphone/ipad app problem and they're utter rubbish! The game we played at the training was far more impressive. Robotek HD... this looks promising. I let it install in the background and I throw a few apps into the favourites. It looks ace. This is much more impressive. I have no idea whats going on, but it looks great.
Some apps have links to videos in the app store, on you tube.. I look at the web browser again and restart top gear. This time.... it plays without a hitch. In fact.... it even remembers the place I left it! The sound really is excellent for a tablet. You can feel the back vibrate, which is supposed to make it sound better.

So.... now, it's working. I'm feeling involved with the content and it's all working well and good. I can open and close programs and group them together using 'cards'. After a truly terrible start. The little unit has redeemed itself. Flicking from program to program, issue to problem was swift and efficient. When you're more involved with the content, you can see it works well. The app store is still sadly lacking some basic apps, (like an official twitter app for starters) and I'm sure the OS will undergo some update to alleviate the initial problems. But. I like it and perhaps surprisingly. I really want one.
at July 12, 2011