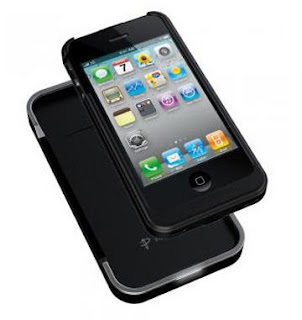 The first time the Powermat came into our stores, it was an expensive option. You had to purchase a case for your device, then you also had to purchase the powermat to charge it. The powermat was priced at around £80. Now they sell an all in one box solution, but for one device only, (the powermat would charge up to three devices, so long as they had the case attached. This all in one box solution is only £40, so clearly its much better value for money. That said, the old powermat was pretty much future proof. So long as the device was powermat compatible, you'd be able to place it on the mat and it would charge. If in the future manufacturers decide that this tech could be in built, you'd still be able to use your old mat. With this, nice though it is, the charging mat is moulded to the exact shape of the case, so even if your shiny new iphone comes with Powermat compatibility in built (which admittedly is unlikely) it won't fit snugly in the charging stand. You'd just have to sell the old powermat with your old phone as an added extra.
Despite all of this we should acknowledge that powermat have made this technology far cheaper for everyone and if you fancy the idea of just throwing your iphone on its own little bed before you retire, then it makes sense. Whether it makes £15 more sense than the iphone or blackberry dock is another question. No denying it's cool though.
at December 02, 2010