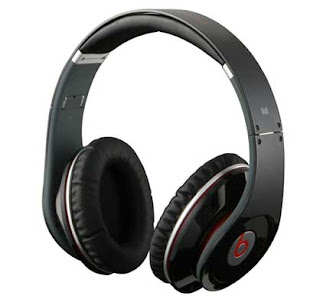 These are the Beats Solo HD big brother. Firstly the thing that hasn't changed is the sound quality. If there is a difference it's not that noticeable, these sound a little more 'airy' as if there's more space between you and the music. Although that sounds like a bad thing, its not. It feels like a slightly larger sound stage. Although that could just be the psychological effect of the larger earpieces? Both the cheaper units and these sound stunning. There isn't a great argument for paying an extra £100 for the sound quality.
The Studio units are noticeably more comfortable. More in line with the V-Moda units tested earlier. They sit nicely on your head and completely cover your ear. This does away with a slightly odd sensation that happens from time to time of moving your jaw sideways and creating space with the Solo HD's which distorts the music a little.
These units also have noise reduction, although rather disappointingly the cover doesn't appear to close tight. When it's replaced after the 2 (supplied) AAA batteries are installed it can be moved easily. It doesn't rattle and when music is played, it isn't an issue. But these are £250 headphones, the cover shouldn't wobble, surely? Whats even more disappointing is that the noise reduction cannot be turned off. Well, not if you want to listen to music it can't. This is a huge drawback as it means listening to music will mean battery expenditure, even if you're in an almost silent room.
Again, like the V-Moda units, these more expensive units are cased in a hard satchel, but like the Solo HD's, they also still fold. The brackets are very well made and (ignoring the battery cover) they feel very well built.

Overall, these are a tremendous set of headphones. Whether its worth paying an extra £100 for the sound cancellation, Hard case and slightly comfier fit, with the drawback of the wobbly cover and noise cancellation that can't be switched off is up to the consumer, for me, it isn't. The Dr Dre Solo HD's still rule; but I do wish the earpieces were bigger.
at December 02, 2010