So, after a week of some pretty challenging weather and flying, I've come to the realisation that it may be time to upgrade the trusty Phantom 3 professional.

But what a decision this has turned out to be.

After some estate agent work mid week, I returned to the studio to find that the capture was suffering from vibrations coming from the gimbal. This isn't the first time I'd seen this, but I thought I'd resolved it. Since then, I've stripped the gimbal down, found a fan with a couple of loose screws on top, and a worn part that is still rubbing against the gimbal arm, which I've bent into a better shape that gives the arm a few microns of clearance. I've reassembled it and done a couple of test flights and it appears to have fixed the problem. The video footage I captured was so still, my wife thought it was a photo until she saw the trees moving. I was able to find many usable clips from the work and put together a video which the client was happy with. But if you look carefully on a 4k or higher screen, you'll see the vibrations.

Anyhow, I have some other work looming which will involve more skilled piloting, and the Phantom 3 pro isn't renown for it's in flight stability. Take a look at this video comparing the 3 with the 4 and you can see how much more difficult it is to fly the 3, especially for close inspection work, which may be required.

So, all things considered, I'm thinking perhaps it's upgrade time, however my budget is limited. £1000- 1500 is the ideal cost, well, no to be honest nothing would be ideal, but £2000 is my upper budget. However the options here are surprisingly limited. 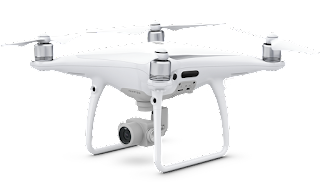 The obvious choice is the Phantom 4. This is the natural upgrade to a Phantom 3 and has a number of significant upgrades. The stability is much better than the 4, and the Pro version has a 4k 60fps camera, which is significantly better than the 4k 25fps of the phantom 3. The camera quality has also been improved with a 20mp unit, with a mechanical shutter. But, and here's the rub. It still looks like a hobbyist machine. It's totally competent, it's a minor miracle of technology, but image is everything. And showing up for a paid job, with one of these, makes you look like you are on a budget. I appreciate the quality of the work and overall level of professionalism should be the key for a client to do business with you, but, well. In the back of my mind, I know..... it looks a bit like, well, a toy. 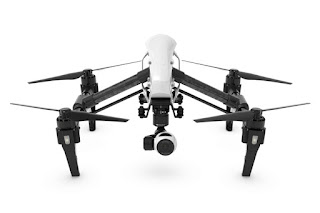 So that brings me on to option 2. The original inspire 1. Now available from a number of outlets for around the £1700 mark, this machine oozes professionalism and high tech. With it's retractable landing gear and futuristic looks, it would impress most clients who've never seen one before. And it comfortably crosses the boundary from amateur to pro (in my opinion). But, it only shoots 4k in 30fps, it has no collision avoidance (like the Phantom 4) and is a bugger to set up. Not only that, I'd also know my flight time was more limited, as it's so much heavier than the 4, it only last about 2/3 of the time in the air! The accessories are more expensive and well, I'd also know, in the back of my mind, it was yesterdays technology, and I think, the 4 is a better all rounder. 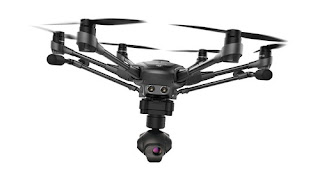 So how about option 3? The Yuneec Typhoon H Pro. This Hexacopter also looks professional. But, well, it isn't. 10 minutes on youtube will show you the video is soft compared with either of the previously mentioned DJI products. It has an incredibly impressive controller, but it runs on Android 4.4 and won't allow you to install apps or share footage easily and is clunky and horrible to use by comparison to the Dji Go app. It has collision avoidance, which is nice, but whilst it's an incredible budget option, it's still obviously a budget product. Although it might impress the client, ultimately, they'd get worse footage as a result and, well I couldn't live with that either.

So none of these choices aren't without their compromises. The head says that the Phantom is the best all round option. The heart says the Inspire, but common sense says hang fire for now. This generation of entry level prosumer drones is just not quite there yet. And if the gimbal of the 3 is working, then perhaps I should see if I can get another 300 miles out of it?

Or, perhaps the heart will win? Lets just wait and see how long the Phantom 3 lasts. Interested in others opinions, bear in mind, the video work I do is mainly, survey, corporate and estate agent, not music video or movie.