The excitement of the ISS (& photography).

Watching the international space station pass over your house is exciting. Even before you start capturing the experience on camera, just knowing that this hulking great big metal mass is flying around the earth every 1 and a half hours, with people on board is extraordinary in itself. Tracking it as it flies over Paris at 200,000 feet as far as Poland and still being able to see it as it disappears into the distance is mind boggling.
If you're in the least bit interested (and I've yet to meet anyone who isn't) then the first thing you need to do is check where it is, and if a visible pass is likely. These clear warm summer evenings are by far the best time to see it. However, it's not difficult once it comes into view. It's totally obvious as it looks like a star, that's moving fast!
http://www.isstracker.com/ is a good place to start. but if you want an app, try ISS?  for Android.
The orbit shows up as a sine wave on a flat map, but of course the orbit is circular. The best time to prepare is as it passes south america, it's usually about 15 minutes away once it leaves the coast and starts passing the Atlantic ocean. Depending on how far south the pass is, you'll need to set up your camera accordingly. If it's passing directly overhead, obviously you'll need to be pointing your camera straight up. If it's passing over France, (from North Wales) you'll need your camera pointing about 30% into the sky. These low passes often make the bast shots, as it's easier to get an interesting foreground in.
To get the ISS to appear as a long streak, you'll need a long exposure. First up, a tripod is almost essential. If you don't have a tripod, you might just get away with a bean bag. 30 second exposure will produce a lovely flight path, but obviously it could create over exposure problems, if the ISO and aperture aren't correct. Select a high Aperture (best for focus) and ISO 100 if you can. Before the ISS arrives, take a number of test shots, to ensure your settings are the best you can get them.
If you have the option of a digital display, flick your camera display on, and make sure you manually focus the camera on a star. This is harder than it sounds. When you're certain the camera is focussed correctly, with your camera on Manual, select 30 seconds exposure time, frame your shot and make a note of where the right edge of your camera meets the scenery. (Assuming you're looking south, it's going to pass right to left). Set the aperture to between 3-9 and the ISO to 100 or 200. Take a test shot and see if you need to adjust anything. The darker the evening, the more you're going to have to compromise on your settings. If your focus is spot on, it's best to compromise on the aperture, before you compromise on the ISO.
When you're sure everything is set up the way you want it, wait for the ISS to appear and when it passes the scenery where you know your camera is aimed at, hit the shutter.
This shot was taken a few years ago, if you look carefully, you can see another streak in front of the ISS, this was a food delivery that was due to dock in the following hours.

Have fun and let me know if you give it a go. 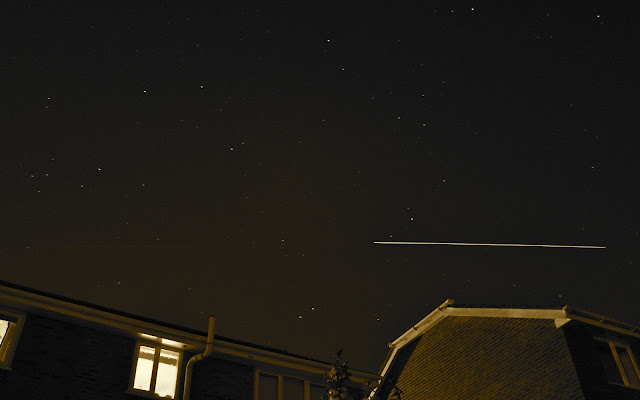