I got out for 4:30pm, travelled to the spot I'd chosen and pointed the camera at the horizon. The cloudy horizon. 20 minutes I thought, it might clear. But alas it didn't. I checked my compass, I knew where the moon should have been rising, but as with all of the best laid plans, it didn't show. It got darker, and darker and the conditions for a great shot became even more challenging, especially considering this was going to be the brightest moon ever. The clouds looked lovely. Illuminated as they were from behind. Then it peeked through the clouds and I started getting my first shots of it. Manually focussed, sharp, shoot, overexposed, adjust, under adjust, snap again. Full manual mode adjusting only the shutter speed. 2 second delay. Push, wait, review, adjust. Push, wait, review, adjust. This was the best, liverpool in the foreground and the moon glimpsing out of the clouds. 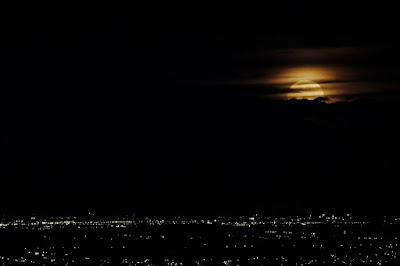 The Daily post liked it and shared it on their page, but I was disappointed. The world was in full supermoon frenzy and I'd failed to get the shot I wanted. So I went home and watched 'black mirror'. Alas, the night was young, and photos came as thick and fast as the cloud. Some of them, the viral ones, so obviously photo shopped. So if you can't beat them, I thought, why not join them. 2 shots sprang to mind, a wonderful street scene I snapped on 1/10 handheld in Paleochora Crete and a moon shot from a long time ago taken with my Canon. 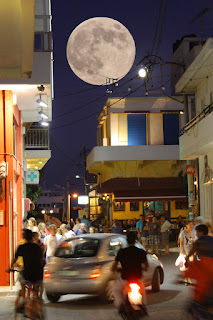 They would look amazing together. 10 minutes later, a layer created from the sky, the actual image in the foreground and the moon slotted nicely in between the two, and this was born. But I knew I'd cheated. I went out and the moon was showing nicely through the clouds, so I started snapping again. Tripod on standby. 2 seconds delay again, ISO 200 this time, 1/60 shutter and f7.6. This pulled the nice detail out of the moon, but also alot of cloud glare from around. Still, a quick whiz through iPhoto (yes I've gone back to it, I can't abide the new Photos application) and I improved the visibility of it. Although the moon detail was disappointing, it was understandable considering the cloud I'd taken the shot through. (But needs another shot when the conditions are better). I pulled the contrast out and this was a legitimate shot. Pretty good, but it was no different to all the other great shots flying about. I lacked punch, it didn't show it was a moon, it looked as flat as all of the crackers and tortillas sellotaped to peoples windows.  It didn't look like a sphere as such. A quick google image search for a b&w sphere and I'd  got my inspiration. 10 minutes in pixelmator and we'd gone from this, to this. On the far left is the original image, unadulterated with a reasonable exposure. Second, brushed up with simple contract and exposure sliders in iPhoto and then finally, with a Spherical overlay to show off the real shape of the moon.

Not the best results for a photography phenomenon. But worthwhile being a participant, even if it was only for the photo editing experience. 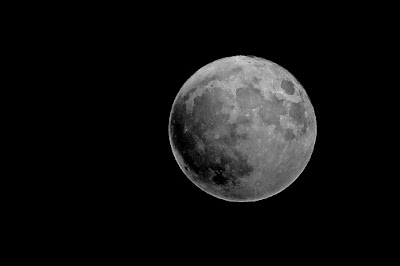