If you have a Smart TV, a newish blu-ray or DVD player, or perhaps a Smart Freesat or Freeview box, which is connected to your home network; and a smartphone, you may be missing a trick or three.

Apple TV users, for the past few years, have been able to blast content from their iPhone or iPad to the Apple TV unit connected to their Television. The upshot is that what they're watching on their smartphone or tablet, will show up on the big screen. Handy if you want to show guests a picture, or a funny video like this one .....
One direction Parody

Furthermore, via the remote app on an iPhone, it's also possible to use your smartphone as a remote control.
These useful functions however are now commonplace to many other smart devices, but several people I have spoken to haven't realised that they own the equipment that can do it.

If your 'smart' AV device is switched on (and is DLNA compliant), when you watch a movie via the Youtube app on your smart phone, if it's connected to the same wifi network, you should be able to see an icon (on your smartphone) which resembles this.... 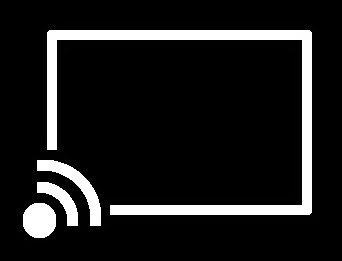 This is your key to unlocking your TV's full potential. Tap on this and select your Smart TV or Smart Device from the list that appears. Instantly or almost instantly, your content that you were watching on your device, will transmit, over your home wifi network to your TV, freesat, or smart blu ray or DVD player. Simple, easy and a free enhancement to your existing equipment which you may not have known existed.

Furthermore if you have a TV set which connects to your home network, it's highly likely it has additional functionality via a dedicated App. Recently, a friend bought an LG Smart TV and was struggling to understand the attractions of the web browser. Moving the cursor around on the screen using up/down/left and right buttons on the TV Remote was time consuming and laborious, inputting text even worse. Then, we had a quick play in the app store and found this dedicated LG Remote App.

Not only did this achieve what I thought it would, insomuch as it would allow him to use the iPhone as a trackpad, and a keyboard (when necessary) it also echoed the TV content to his phone, meaning now, he's free to watch what's on his TV, whilst he's sat on the throne! It was relatively easy to find our way around the App and I'd have given it more than the 3 stars it currently has on the App store.

Amazingly a the time of writing this, we have just had a customer ask, about exactly the same thing. He wanted to buy a Mi-fi device to blast content from his Tablet to his Chromecast stick (plugged into the back of a TV whilst on holiday ). Our advice? If the Movie content is on the Tablet, tether the chromecast and tablet to his Galaxy S3 and do away with the Mifi device altogether and steer clear of Netflix (as that would destroy his data allowance).
That was our professional advice, my personal advice would be, if you're on holiday, find a bar, dance on the tables, get drunk and forget about technology, it could ruin your holiday if it doesn't work or eats your data allowance.