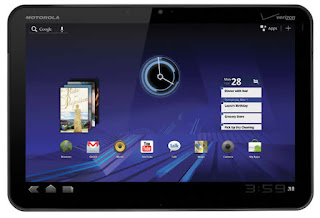 I still can't decide whether there is room for one of these in my life or not. The argument I get from so many people is that, if they just want to look on the internet for something quick. A tablet is always on, so they could pick it up and launch their browser straight away. Now without wanting to spark a Windows vs Mac debate. I can already do that on my Mac anyway, even when its off, and even if I have to put my password in. Not only that, but sadly, due to a major lack of a social life. It's usually keeping my knee's warm anyway. However, What is it like to use? Well, it's always on, for a start. The android OS is dreamy to use. It really is simple and it has so much 'desktop' space to customise, I really think that there is more than most users would ever be able to make use of. The two camera's are useful for things like skype video calls and er, photos. The Camera is ok, although for a 5mp, it isn't quite as sharp as I'd expected. But its most certainly useable. The web browser is exceptionally good and I declare, for the first time ever, flash support is every bit as good as a PC. If you have a penchant for Moshi monsters and you absolutely must have a tablet, then I can wholeheartedly recommend it. There's also something still magical about 'touching' the pages, and moving them, using your fingers, where you want them to go. The music player, plays music fairly well, although having the headphone socket slap bang in the centre top of the device, when viewed in landscape mode is questionable.... I suppose if you spin it, it's dead centre bottom? The screen looks pretty good. The resolution is very impressive, albeit nothing to get over excited about. The one thing that is noticeable however is the weight of the thing. Without an ipad-esque folding stand cover screen protector, the unit either lies flat on your lap, or needs holding with your hand. After a while, holding the device becomes tiresome. As is also the norm, the screen becomes dirty after a relatively short period of url entering. What it really needs, I thought, Is a fold down keyboard, that could also act as a stand. This is when it dawned on me. What I'd far rather be using, is a macbook Air. Imagine if you will that the tablet form factor had preceded the laptop. How excited would you be about the manufacturer, that had developed a machine that
1) Folded away, so you didn't need to worry about the screen breaking?
2) Folded out, like a stand, so you didn't need to worry about holding it?
3) Had a wholly separate keyboard, so you could keep your screen cleaner for longer?
You'd be excited right?
The 11" Macbook air (which can sit on your lap) weighs just over 1kg. The Motorola Xoom (and iPad) weigh approximately 730g.

I did run into several problems while trying to get it to work with iPlayer. The Beeb Player app refused to work. iplayer website via firefox for android and opera, didn't work. It would only work through the motorola installed browser. It also locked up on more than one occaision, but I did get it to play an episode of Top gear, in which I saw a small excerpt of the LFA test, and heard a small section of music that took me over a day to work out what it was. (Shazam failed).

So in a nutshell, it does what its supposed to. It has a wonderfully responsive touchscreen, it has a great big display. It'll play videos, music, it'll obviously do facebook and twitter, it has camera's where it should. It does everything pretty competently. But like all tablets. It doesn't do them quite as well as a laptop would. Well, at least not an Apple one. When Apple put a touchscreen on a Macbook Air, now there will be a machine!
at April 25, 2011