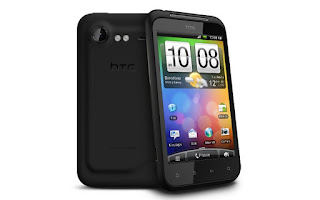 The HTC desire was an exceptionally good class leading android handset, that catapulted HTC to the forefront of smart phone development and sales. The Wildfire was a good entry level Android phone. So how does the Incredible S stack up next to them? well, To start with, it feels like its got one of those 'extra battery' cases on it. Initially it feels odd. Although the matt black plastic feels high quality. If it weren't for the extra bulk, it would be as slim as an iphone4. But because of it, it isn't. All of the extra goodies in the box are wrapped in strange grey sealed body bags. Neat, but weird. I slip a sim in and boot up. What I'm hoping for here, is a Desire, with a better screen, sound and swype! Initial impressions are hopeful. The screen looks excellent. Clear and responsive too. It feels like a high quality device. Flicking from app to app, the handset copes brilliantly as I fumble my way through the menu's, changing my mind, the phone keeps up with my indecision. The clock is animated well, the time changes elegantly in the background. But, I notice the optical sensor is gone! This made editting previously input text (with errors) easy. So, I see what the incredible S user must do. I enter part of a message and tap earlier in the sentence. I see underneath a grab icon/pointer thing. I touch it and above a square window with the icons whereabouts on the sentence is highlighted, I can then drag the icon back and forth, easily seeing where the cursor is......it's an improvement! Whilst it's flattering to Apple, as its a mimic of their iOS method, it is nevertheless an improvement; the optical sensor loss is no bad thing. The web browser works well, pinch to zoom effective as ever. Then I notice something magical. I had spotted the icons on the bottom of the handset seemed to be illuminated a bit odd. From any other angle besides straight on, they dimmed. But, when you rotate the handset, INCREDIBLY, the seemingly static buttons also rotate! I'm wowed! I show the team, they think it's incredible. The camera compliments the screen, (or the screen compliments the camera) and images are sharp and extremely clear. From the viewer, the opportunity to upload to twitter, picasa, mail, message, flickr, facebook or simply send via bluetooth appears. Maps look beautiful and streetview is easily accessible. I play some music. It sounds shrill at first. Then I listen longer and re-assess, no, it sounds clear. There's lots of treble. Its not loud, but it is listenable. This may seem a tad overkill to rate a phone based on the quality of its internal speaker, but I find I do sometimes watch an episode of something, via iplayer, or tvcatchup and I do need to use the speaker. If it's shoddy, I'd resent it. Obviously headphones are preferable, but this isn't bad, I could live with it. To summarise. This is another pretty impressive HTC handset. Yes it will also have the usual excellent HTC touch services to back it up, but to live with on a day to day basis. It's seriously a top quality handset.

[edit] Another highly impressive feature, is it's boot up time, from standby, it takes less than 10 seconds! It's almost Mac like!
[edit] putting it back in the box I notice a front facing camera so skype video calling is clearly supported.

I like it alot. Even though it doesn't have swype*!


* It should possible to install swype, it probably involves allowing third party apps to install and finding the right source somewhere on the internet .....google it if you need it!
at April 02, 2011