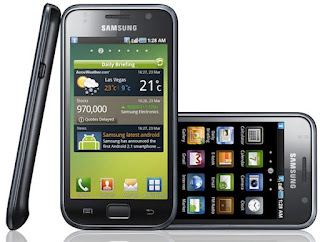 Although this sounds like the bog standard Ford MPV, it is in fact a new Android phone from Samsung.  Having been exposed to the Wave, only a few days ago, initial impressions were that it was another phone working on the 'Bada' platform. The background images and the icons look very 'Wave like'. The screen is stunning, its another corking samsung display and its very, very high clarity, high contrast, clear and sharp. Swipe the imaginary dark screen away to unlock the handset. Google maps shows the screen off to its full extent, multitouch is present, pinch to zoom works very well and the handset is very responsive. Apps flick from one to another very quickly, in a very simple to understand interface. It's almost like Samsung have made this handset to look like Bada, as if to prove a point. As if their phone OS were always as good as google's anyway? But I'm probably wrong. One annoyance is that there is no dedicated menu key, so to get to the installed apps, you have to click the icon on the screen. There's an ebook store which brings up an uncanny Apple-esque bookcase to view ebooks. Which (although good) show that the screen isn't quite perfect. Written text, although very clear, is ever so slightly pixelated (I'm being really picky). Apps store looks good. Sky Maps (has it been updated?) looks superb and I discover why it didn't work for previous models, Time and date is set incorrectly by auto update! It has an 8GB card on board. The video camera, perhaps no surprise, is full 720x480HD, playback still seems a little jerky, as do most of these handsets. But there is no way to edit recorded video, like iMovie for the iPhone promises. Altogether, this is a truly fine handset. It feels a little plasticky in the hands, but like many of the handsets coming from the Android stables. It's very good. If I were to criticise it, it would be that its a little fisher price. Perhaps over simplified a little. Without the optical sensor of the Desire, this starts life on a back heel. The problem is, the market is becoming swamped by Android phones of late.... and this is just another good one. At a price of £450, (£50 less than an iPhone4) it really isn't that special. Unless you have a healthy staff discount scheme, or can get one for £25 a month on contract, I'd have to conclude, there are better choices.
at June 16, 2010