I've been spending a lot of time looking at some of the worlds available in Minecraft Education Edition. There's a buzz around a number of them and I've downloaded them to play them through so I'll know before students, what to expect. I want to keep notes, but I also thought these notes might be useful for others.

Very simple play through, but quite long. Play starts outside a Library which is supposed to be closed, this world is unique in as much as the characters not only have dialogue boxes, but they actually talk. There are a number of logical challenges in the game, mostly simple spelling but young players might get stuck near the beginning as letters that need to be found in the library are scattered around, but the last one is hidden in a chest, this took me a long time to find. Perhaps a class might find it quicker and once the location is known other will find it too. Of course, this needs to be downloaded as individual games to every players device, not a shared world. It's under Lessons>>Languages>>Additional, so pupils can easily get it onto their machines after they've logged in. The second stumbling block for me was a room where nine letters can be found to complete a sentence. The first three are easy enough to find, but the mine is pretty dark and to find the other 6 you need to mine through into adjacent rooms, which aren't that obvious. There are different coloured blocks to indicate where to mine, but it took me a while to find them. The last section involves taking a purple torch from a Dragon's mouth. I found this (on a 2017 iMac) to be quite buggy, and although I eventually made it to the end of the adventure, I did wonder if it would work. In a nutshell, it's worth a go, the challenges are fun and will definitely get students engaged, although I wonder if some of the words might be a tad difficult to guess? Would love to hear if anyone runs this lesson in their class and what you and your students thought of it. The world is a staggering build and fantastic to behold, you'll get some 'wow's' from your pupils as the creation is fantastic. 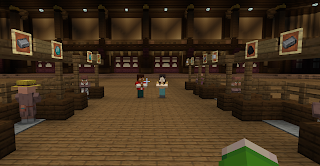 The Second world I played is the Careers Craft Wales one, with Caerfnafon Castle, Tenby, the Senedd and the Coal Exchange. https://careerswales.gov.wales/plan-your-career/careers-wales-education-resources/careerscraft-on-minecraft 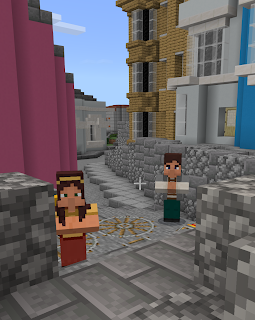 This is also staggeringly impressive. I'm pretty sure this one isn't available through 'Lessons' so you will have to get the link to your students via classrooms or email. There's a bug in the Coal exchange where you cannot reset a bad trade. Players are told to exchange coal for the most amount of Gold, but if they get it wrong first time, there's no way to go back and try again (at least not an easy way I found), I would suggest moving on. There is also the Myers Briggs personality test in Tenby which is Fantastic (I used to be INTP, now I'm apparently ISTP)! Definitely the most novel was to bring personality type testing into the classroom. However when you get your result, if you end up on the top level (there are dozens of outcomes) you cannot get back to the carts, there are 2 border blocks in the way, (I found if you jump up onto the RH block, you can get though, but this gap should be on the path). Other than that it is pretty sensational. Talking to the various characters at the Castle event certainly gets one thinking about the various employment opportunities young children could consider when they're older.

Hope this is useful, if you have done these lessons in your classroom, I would love to know what you think. Also if this type of feedback is useful please let me know and I will post here in future.