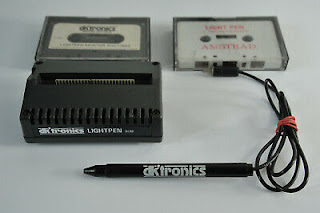 I often reflect back on my childhood and how the devices and technology we're using now, would literally blow my mind. When I was around 14 got my first 'PC'. Although it wasn't a PC, it was an Amstrad CPC 464. Without getting hung up on the staggering difference in storage size, processor speed and operating systems from this and more modern PCs, it used normal cassette tapes to load programs. Albeit from it's in built tape recorder; a cutting edge innovation of it's time. Two curly cords connected the Monitor to the 'Computer' which was built into the keyboard, which again, was staggeringly innovative for the mid eighties. I remember I had a cartridge which plugged into the back of the keyboard with vents in to keep it cool, this had a lead going to a device that reminded me of a berol note writer pen, without a nib. Inside was a small sensor which knew which part of the screen it was looking at. Completely inaccurate, this 'light pen' managed to write on the screen in a program not dissimilar to paint, to draw lines, spots, or fill shapes with colour. There was only one program to use with this one pen. Software was hard to get your hands on, if WH Smiths didn't sell it, you had little hope of finding anything else. There were a couple of versions of light pens though, I had the DK'Tronic unit (linked here). Images I created with it though were pretty useless as home printers weren't a thing. I couldn't email it to anyone, I couldn't save it to the computer as it had zero storage space, I could only really save it to a tape, but then I'd have to know which tape, and what the counter read when I'd finished saving it, so if I were to save other data to the tape in future, I didn't accidentally record over my picture. So I would rewind the tape to the start and reset the counter to 000 with the reset button. I'd also wind the tape with a pencil to the start of the magnetic strip to be certain no data would be lost on the run in from the tape which wouldn't record (because I was a computer expert and thought about these things). I would hit record and play (both buttons needed to be pushed for an export), and instruct the program to save the image. The program would automatically start the recorder, because of how high tech it was and I would then hear the data being written to the tape. Then when the save was complete, I would note the tape counter and write in the sleeve ...

Nowadays the pocket computer I have, (or 'smartphone' as we prefer to call them) has a lightweight built-in 'light pen'. It charges in around 40 seconds (inside the device) and lasts for about an hour. It connects without wires, and lets me operate my handheld, pocket sized, device by tapping on the screen. Or I can  select text by pressing the button and dragging over sentences or paragraphs. In addition, it can also remotely trigger the in built camera.... sorry cameras, plural, three on the back and one facing forward. Software isn't loaded by tape on our devices, every program is already stored on the device, and will load in a matter of seconds. If a program isn't on the device, I can get it from thin air; or games, or spreadsheet programs, word processing, we literally have everything in the palm of our hands, the choice of hundreds of programs. Plus my smart device can also play my favourite trilogy of the time then, and perhaps still now; Star Wars. Even though there is no VHS cassette, disc, or film stored on it.

I'd be completely astounded if I could talk to myself aged 14,  if we did chat, I think the current me would likely give my past self a bi-dimensional panic attack, but once I was over that, if I mentioned that these devices could watch A New Hope, Empire Strikes Back and Return of the Jedi, on one battery charge in incredible clarity (and stereo!), even if I were sat in the middle of nowhere, I would be utterly astounded. And it is astounding when you think about it. What we grew up with, and what we have the capability to do now, the difference is night and day.

We really do have incredible technology at our fingertips, it's crazy really to think if anyone spent a good deal of time explaining this to their 14 year old self, that the old self could imagine how anyone wouldn't be ecstatic all of the time. Yet instead, sometimes our devices feel like such burdens and they're really not, it's just how we choose to use them.