MOMO, Blue Whale and Slenderman are all quite frankly sick. I've just this morning read a post from a mother who is distraught that her young child has been exposed to Momo and is now struggling to sleep, living in fear and causing distress with other children in school.

If you have young children and they mention any of these, you do need to intervene. Having now finished the end of this blog post, I think it's probably best to talk to them about it or at least clue yourself up, before they suffer the same.

So what are these new modern urban legends?
In a nutshell, they're all pseudonyms for bullying. Anyone can, in reality, pretend to be the Slenderman, Momo, or the operators behind the Blue Whale challenge. I guess that's the frightening thing is that anybody could chose to be any one of them by changing their Whats App name and profile picture.

The Momo character is based on a vulgar sculpture called Mother Bird by Japanese effects company Link Factory.

So how does it work?
The enabler here seems to be Whats App. The sender confirms the identity of the victim via What's app and divulges information that they know, to think they have power over them, or they just tell them Momo will get them in their sleep (if they tell their parents). For a child, this makes them think that the bully, [the perpetrator behind the mask] has more power than they actually do. Reports state that victims have received creepy calls, scary video messages and dares to complete.
As these children feel that Momo is real, and that they have power over them (the urban myth grows arms and legs) they fulfil the dares, which get progressively worse and have (reportedly) resulted in suicide.

Back when I was a child, in the 80s this would have been the stuff of horror movies. A random phone number calls you they know your name, things about your and they know what you look like!
As they're using a pseudonym, these bullies may be close 'friends'. This friend will know a lot of things about you, like the school you go to, maybe even where you live, which would of course be terrifying to a young child.

Even if the bully didn't know the child personally, with the internet being what it is [a super information highway], the perpetrator could google other facts about you, or your child. The more of a social presence the individual has, the easier it will be for the bully.

I think from a parents point of view, the most terrifying thing is the 'unknown' aspect of it.

What we can do is educate our children. But when this 'game' seems so complex and mysterious, how do we explain it to them in a way that won't leave them terrified of Momo, or Slenderman?

Perhaps this (and the graphic below) will help. Behind every terrifying encounter is a bully. Through What's app (or perhaps because they were a friend) they may be able to get someone's phone number, which in turn (thanks Whats App) will give them the identity of the person, and their image (perhaps).
Using that information, they could find out other things about you, in order to make you think they know more about you than they do. But at the end of the day, the scary thing, is just a mask, it's not real. The real person is just an idiot with nothing better to do that scare children. 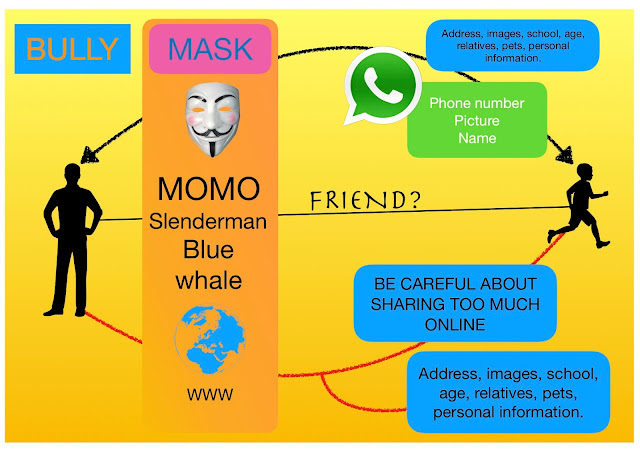 Minecraft
There is also a skin for Minecraft that is called the Momo skin, and although it's not particularly nice, it doesn't change the dynamic.
In order to infiltrate the victims Minecraft game, the victim would have needed to have divulged their gamertag (if you're unlucky enough to be involved in one of these situations, it's worth checking old Whats App messages). Of course, as is more likely, if the victim personally knows the bully, then they may already be friends through the console, and situations where friends of friends are involved in the same game could enable an encounter with Momo.

Youtube
So all of this recent media attention, all of this scaremongering makes for great headlines. The UK loves a good scare story, and in addition, YouTube creators love hits. The Momo search is one of the most popular on youtube, and honestly, some kids also love a scare. This obviously helps no one though, as one of the top hits is "5 times Momo was caught on camera in real life" but as it's had over a quarter of a million hits, it's easy to understand why the creator made it. Definitely an argument for more strict censoring of Youtube videos though.

5) Log any details (phone number) of people pretending to be one of the above and report it to the police and your school.
6) Audit your child's friends via their games console, ensure that they know who each and every one is and block those who they don't.
7) Check what they're watching on YouTube, many YouTubers have enforced these urban myths, by creating videos of their 'encounters' with Momo, imitating calls and scary things happening (for hits).
8) Be careful what your child shares online. Instagram, Facebook, Snapchat, it's all in the public domain and could be used by bullies against them.
9) Stay anonymous. Until your child is old enough to manage, it may be best to either avoid completely or create profiles with no identifiable information.

Of course there is the problem that if this is raised in a school assembly, then some children will pick the idea up and run with it.

Stay safe and if you have any suggestions, comment below.