Why your Smartphone is safer than Contactless.

Many people, myself included, were both excited and fearful of contactless payment. On the one hand buying a few spuds by simply wafting your card close to a terminal, is convenient, on the other hand, worryingly easy. Indeed it wasn't long before the media cottoned onto our fears and started feeding us stories of 'skimmers'; people with erroneous card payment devices like Square and iZettle, and people got worried. Having said that, here's the latest story (at the time of writing) from 9 hours ago. So the fear is not without justification. Companies have been selling NFC secure wallets, bags and purses, for some time so the signal won't emanate too far. 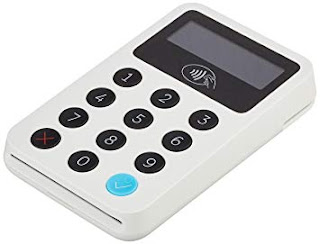 So advancing this technology into smartphones would surely be more risky? Not at all. Because the NFC chips in Android phones sit dormant until they've been enabled. They're only enabled when your phone is unlocked. So skimming isn't possible. If your phone is in your back pocket (far more likely than your credit card) Google Pay and Apple Pay will only work if the handset is unlocked first. So leaving your credit card at home and only taking your smartphone is actually more secure.
If you've steered clear of the technology because of the worry it's worth checking both apps out. When it first started it was very hit and miss, sometimes the machines recognised it, sometimes they didn't. But for the past 12 months it's been bulletproof and has got me out of tight spots a number of times (when I'd forgotten my card). It's still only good for purchases up to £30, (like contactless cards) but it's still very useful most days.
Rest assured if your phone is protected with a PIN, pattern, (or most conveniently) a fingerprint, then your money is more safe than it is on your contactless card.
at September 06, 2018