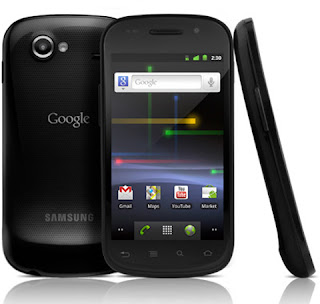 Ok, I've opened the box and, well, to be frank, with the exception of the buttons at the bottom of the screen, it doesn't look that much more different than a Galaxy S. Turning the unit on, and to get started, I have to touch up the Android. Is there some subtle psychological 'connection' here, by touching the android, somehow, I'm accepting it into my life? Then, as per usual, create or sign in using the gmail account I have, noticing in the process that Swype isn't enable out of the box, or as an input option. Why ever the hell not, it's one of the best things about android? Signing in shows us that, it hasn't realised it doesn't have a data connection, so it asks me to connect to wifi, which I do; and then re-input my password. There's a problem with our wifi too so, I skip the process to troubleshoot. I attempt to slide the menu from the top of the phone down, but I notice that the quick access wifi, bluetooth, options are no longer there, like on the Galaxy S. Again, logically, you have to ask, why ever the hell not? Who decided to take them away? So I access the wifi option in the main settings menu, and check eveything looks ok. Whilst in the wifi setting on the phone, I touch the Home button, but nothing happens. This really isn't the best start to a review ever. Although I appreciate some of the problems may not be down to the handset, but some are! Whilst breaking to type, I notice that the screen shuts down, like an old black and white TV. The screen crushes to a white line in the middle, which disappears into a white dot. Very slick. But so far, its all show and no go. The main menu icons, appear on a sort of roller, the middle 70% of the screen is flat, but the top and bottom roll away into the distance, a bit star wars credits like. Again, very showy, but so far we're struggling with the content side of things. This is quite a useful 'showy' feature however as you can just about make out what the icons just 'off screen' actually are. As well as being able to swipe between home screens, you can also tap just left and right of the dock, dots show you how many screens are to the left and right, zero dots, means you reached the last page. The home button, even from here, simply refuses to play ball though. I check to see how much information I can get from the wifi settings screen, but I have to revert back to my iPhone to realise, the damn router isn't dishing out IP addresses. So I reboot, and reboot again. Third time lucky, and now I can start testing! I boot up the browser easily enough and see that the screen is every bit as good as the Galaxy S. No improvement for sure, but the Galaxy S screen is superb, so it's no bad thing. I learn here, that the magnifying glass icon doesn't work either. The two remaining buttons, menu and back, fortunately work as expected, so getting back to the home screen, can be done, albeit with numerous button pushes, instead of just the one. I install google sky maps, and it installs and looks as good as expected, the magnetic compass working well too. I'm notified I have more junk email, which I sift through, passing up the opportunity to earn 25 million US dollars. I check the boxes and delete emails, Simple. I hammer the back button and fumble my way back to the home screen. This is surely a bug, (I think), so I reboot. I wait........
IT IS! Both the home button and the search buttons have decided to play ball. Huzzah! The dock at the bottom of the, now fully functioning, home screen display Phone, Menu and Browser. These cannot be amended, but perhaps thats no bad thing? There are also a couple of new wallpapers, polar clock and Microbes being very nice. A market place adverts app is on page two, which takes to straight to the market place app its advertising. The you tube app allows you to take video and upload it in a few simple steps. The phone is working as you'd expect. It's nice. But once again, as with many handset manufacturers it's a nice evolution of an existing great handset. There is nothing here that would wow you from choosing a Galaxy S. Apart from the knowledge that its a newer model. The phone does work swimmingly well though (not the buttons are working) it flicks from app to app and screen to screen and page to page with relative ease. It's definitely one of the best handsets around. But, when a manufacturer is releasing a handset like this one now, when the Galaxy S is still around, the question is why? I don't even know whether it's higher or lower spec than the Galaxy S, (that's not the purpose of this blog). Why do some manufacturers have to keep on reinventing and refining their product line up, when a company like Apple only need to produce one every year or two? Make me wonder if Samsung would have been better using their R&D money for making a classier less plastic case? Concentrating on the design, rather than the functionality? Or at least improving the balance? Or at least putting Swype on it!
at January 17, 2011